CURVE, Pa. – This Sunday the Altoona Curve, Double-A affiliate of the Pittsburgh Pirates, will be paying tribute to 2012 Curve outfielder Evan Chambers, who passed away at his home in Florida during the offseason. The Curve will be wearing jerseys that are in the likeness of the 1992 home uniforms worn by the Pittsburgh Pirates on Sunday and each uniform will carry a patch on the left sleeve with the initials “EC”.

Chambers, who played 31 games in a Curve uniform during the 2012 season, was injured most of last season and only played in four games for the GCL Pirates. A standout in high school, Chambers was selected in the third round of the 2009 draft by the Pirates and began playing the system shortly thereafter with the State College Spikes.

“The mark of this young man was the impact he made on the lives around him,” said Curve General Manager Rob Egan. “I never saw him without a smile on his face and his positive attitude carried over to his charitable work off the field. He embraced the chance to help others – especially kids. That’s why it’s so appropriate that this special jersey auction will contribute funds to St. Jude.”

Born in Miami, Fla., Chambers was heavily involved in working with children and volunteering his time at local charities in his hometown of Lakeland during the season as well as in the offseason. Funds that are raised from the in-game jersey auction this Sunday will be made to St. Jude Children’s Research Hospital in Evan’s memory.

As it has for the past several years, Reliable Tire Towing and Auto Centers of Altoona is underwriting the cost of the special jerseys so that all of the proceeds from the auction will go directly to St. Jude Children’s Research Hospital.

The Bradenton Marauders, High-A affiliates of the Pittsburgh Pirates, will hold a night in Chambers’ honor as well on Thursday, July 10.

Below is the jerseys the Curve will wear and auction off. 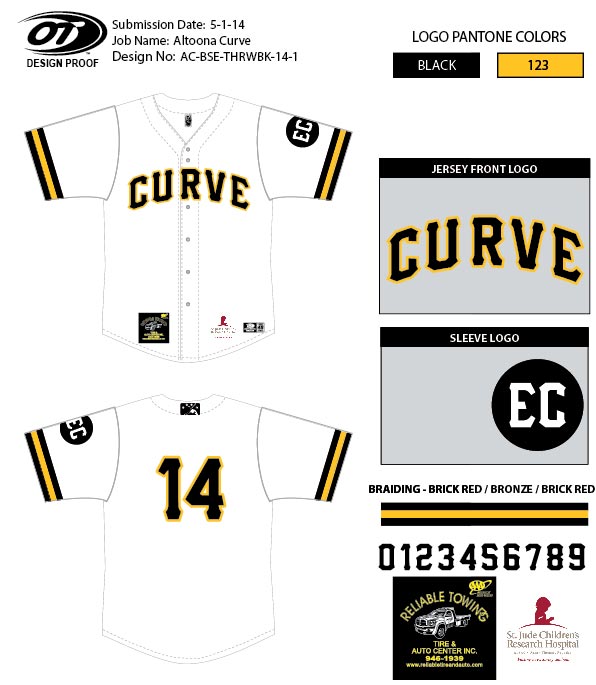