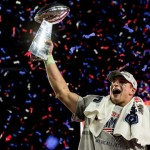 The Pirates (83-55) are back at PNC Park after a 4-5 road trip to Milwaukee, St. Louis and Cincinnati. A.J. Burnett (above) will make his return to the starting rotation after missing six weeks with a forearm injury. The Bucs are hosting the Brewers for four games this weekend. First pitch is at 7:05 p.m. ROOT Sports Pittsburgh

The Steelers will kick off the 2015 National Football League season with a visit to Foxborough, Massachusetts to take on the defending champions, the New England Patriots (tight end Rob Gronkowsi pictured at right). This year’s quest for the Lombardi Trophy begins at 8:30 p.m. WPXI-TV, NBC

The Steelers and Pirates will be playing at the same time tonight, and some older players are expected to make contributions for both squads. We want to know, which veteran will have the bigger impact on his team in 2015; 38-year old Pirates starter Burnett or 37-year old Steelers linebacker James Harrison?

Jung Ho Kang put an emphatic stamp on the Pirates 5-4 victory over the Reds last night, blasting a sixth-inning grand slam, the first of his career, to put the Bucs on top for good. J.A. Happ won his fifth consecutive start and Mark Melancon regained the National League lead with his 44th save.

Our Alexander Chismar thinks that the Pirates can still find a way to catch the Cardinals and win the NL Central.

See where the Pitt Panthers landed in Matt Shetler’s Week 2 ACC Power Rankings after their season-opening victory over Youngstown State.

On this date in 1985, New York Mets slugger Keith Hernandez (right) testified in the “Pittsburgh drug trials”. Hernandez testified that he’d been using cocaine for years and that 40% of Major League players did, too.

The trials involved testimony from a number of MLB players, including the Pirates’ Dave Parker. They resulted in seven convictions for trafficking cocaine.

He said it: “I think if he plays with Sid, he can score 50 goals at least.” — Penguins center Evgeni Malkin on new acquisition Phil Kessel’s potential for the 2015-16 season.