Good morning, Pittsburgh. Here's your day in sports for Wednesday, October 21, 2015. What's on tap for today: Pitt's women's basketball team is getting close to their run for a second consecutive NCAA tournament bid. Head coach Suzie McConnell-Serio is at ACC media day today in Greensboro, North Carolina. Pittsburgh headlines: The Penguins (3-3-0) evened their record and got the power play and captain Sidney Crosby both on the board in a big way in their 3-2 overtime victory ... END_OF_DOCUMENT_TOKEN_TO_BE_REPLACED

After a rocky start, the Penguins have climbed back to .500 with their third consecutive victory, this one coming at the expense of the Florida Panthers by a 3-2 margin in overtime at Consol Energy Center on Tuesday night. In addition to exorcising the demons of their early start, the Penguins turned things around on the power play, as well. After starting the season 0-for-17, the Pens scored two goals on the man advantage, including Evgeni Malkin’s 4-on-3 game-winner in overtime. Florida ... END_OF_DOCUMENT_TOKEN_TO_BE_REPLACED 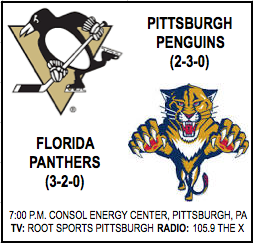 The Penguins have turned around their 0-3 start with consecutive wins against the Ottawa Senators and Toronto Maple Leafs to climb back to the verge of respectability. The one thing that they haven’t fixed is the team’s 0-for-17 power play. The newest alignment, featuring Chris Kunitz in front of the net instead of Patric Hornqvist, was featured at today’s morning skate. The rest of the alignment has Kris Letang the point, Sidney Crosby on the right wall, Evgeni Malkin on the left wall and ... END_OF_DOCUMENT_TOKEN_TO_BE_REPLACED

The Steelers locker room following the team’s big 25-13 victory over the Arizona Carindals was subdued by the news that starting left tackle Kelvin Beachum has a torn ACL in his left knee. Beachum was injured on a rushing play in the second quarter against the Cardinals. He was helped to the sideline and left the field on a cart. He was seen in crutches after the game, when head coach Mike Tomlin announced the nature of his injury. ACL tears usually require surgery and are often season ... END_OF_DOCUMENT_TOKEN_TO_BE_REPLACED

In a Steelers season full of unlikely heroes, Chris Boswell and Landry Jones may least likely of them all. Jones came on in relief of the injured Mike Vick and Boswell connected on four field goals to lead the Steelers to a 25-13 victory over the Arizona Cardinals at Heinz Field. Coming in with 10 minutes remaining in the third quarter after Vick suffered a hamstring injury, Jones sparked the offense, finishing his first drive with an 8-yard touchdown pass to Martavis Bryant in the back of ... END_OF_DOCUMENT_TOKEN_TO_BE_REPLACED 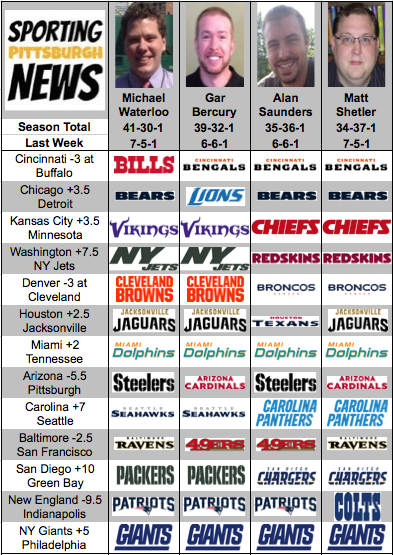 Pittsburgh Penguins right-winger Beau Bennett will miss more than one game with his still-undisclosed injury. The team placed Bennett on injured reserve today, meaning that he will miss Saturday’s game against the Toronto Maple Leafs and next Tuesday’s game against the Florida Panthers. Head coach Mike Johnston had no further update on Bennett’s condition after the team’s practice on Friday. “He’s injured right now and we’ll wait and see as he progresses over the next little while,” ... END_OF_DOCUMENT_TOKEN_TO_BE_REPLACED

Good morning, Pittsburgh. Here's your day in sports for Friday, October 16, 2015. What's on tap for today: RMU will kick off it's quest to repeat as Atlantic Hockey Conference champions when the Colonials start their season tonight at the 84 Lumber Arena against Air Force. 7:00 p.m. ESPN Radio 970-AM Penn State will also get their home hockey slate started tonight. The Nittany Lions will host Notre Dame at 7:00 p.m. Penn State Sports Network Week 7 of the nine-week WPIAL football ... END_OF_DOCUMENT_TOKEN_TO_BE_REPLACED

With the offseason additions of Phil Kessel and others, the Pittsburgh Penguins were supposed to be an offensive juggernaut this season. Having failed at that task through the first three games, the Pens won their first of the season on Thursday night with some good, old-fashioned defense, shutting out the Ottawa Senators 2-0. The Penguins defense was aided by an offensive attack that outshot the Senators 36-22 and kept the puck in the Ottawa end of the rink for large stretches of time. ... END_OF_DOCUMENT_TOKEN_TO_BE_REPLACED

After three straight losses to start their season, the Pens have shaken things up a bit going into their game tonight against the Ottawa Senators. Not all of them are willing changes. Right-winger Beau Bennett, one of the team’s best players in Tuesday’s 3-2 loss to the Montreal Canadiens, has suffered an undisclosed injury and will miss tonight’s game as a result. With Bennett out of the lineup, expect rookie right-winger Daniel Sprong to get his first shot an increased role. Sprong, who ... END_OF_DOCUMENT_TOKEN_TO_BE_REPLACED