Duquesne (17-17) completed its season as it fell to Morehead State (21-12) 82-72 yesterday at Morehead, Kentucky in the quarterfinals of the College Basketball Invitational. Senior guard Micah Mason scored a game-high 24 points while senior guard Derrick Colter contributed 16 for the Dukes. Senior guard Brent Arrington led the Eagles with 17 points. The game consisted of five ties and six lead changes before Arrington hit a shot from halfcourt at the buzzer to complete a 10-2 run ... END_OF_DOCUMENT_TOKEN_TO_BE_REPLACED

Duquesne (17-16) plays Morehead State (20-12) tonight at 7 p.m. at Johnson Arena in Morehead, Kentucky in the quarterfinal game of the College Basketball Invitational (CBI). The Dukes, coming off the school’s fourth post-season tournament win in 47 years, look to post back-to-back post-season tournament wins. Duquesne defeated Omaha 120-112 on Wednesday. The Eagles, who have won eight of its last nine games, return from an 84-80 win at Siena on Tuesday. Tonight marks the first ... END_OF_DOCUMENT_TOKEN_TO_BE_REPLACED

Duquesne (16-16, 6-12) hosts Omaha (18-13, 10-6) in the first round of the 2016 College Basketball Invitational (CBI) on Wednesday at 7 p.m. Wednesday marks the Dukes’ first post-season appearance under fourth-year head coach Jim Ferry and the program’s first since 2011. Duquesne made CBI appearances in 2010 and 2011. The matchup will be the first post-season home game for Duquesne since the 1994 National Invitation Tournament (NIT). The 2016 CBI will open with eight first round games ... END_OF_DOCUMENT_TOKEN_TO_BE_REPLACED

Duquesne (15-15, 5-12) ends its regular season as the team faces Saint Joseph’s (24-6, 13-4) today at 4 p.m. at the Michael J. Hagen Arena. The Dukes, who look to break even on the season, hope to end an eight-game losing streak. Of the past eight losses, three defeats came by four or fewer points and a fourth came in overtime. Saint Joseph’s leads the series 38-13 overall and leads 20-2 at Philadelphia. Duquesne comes off a 78-69 loss to Fordham on Wednesday. Saint Joseph’s returns ... END_OF_DOCUMENT_TOKEN_TO_BE_REPLACED 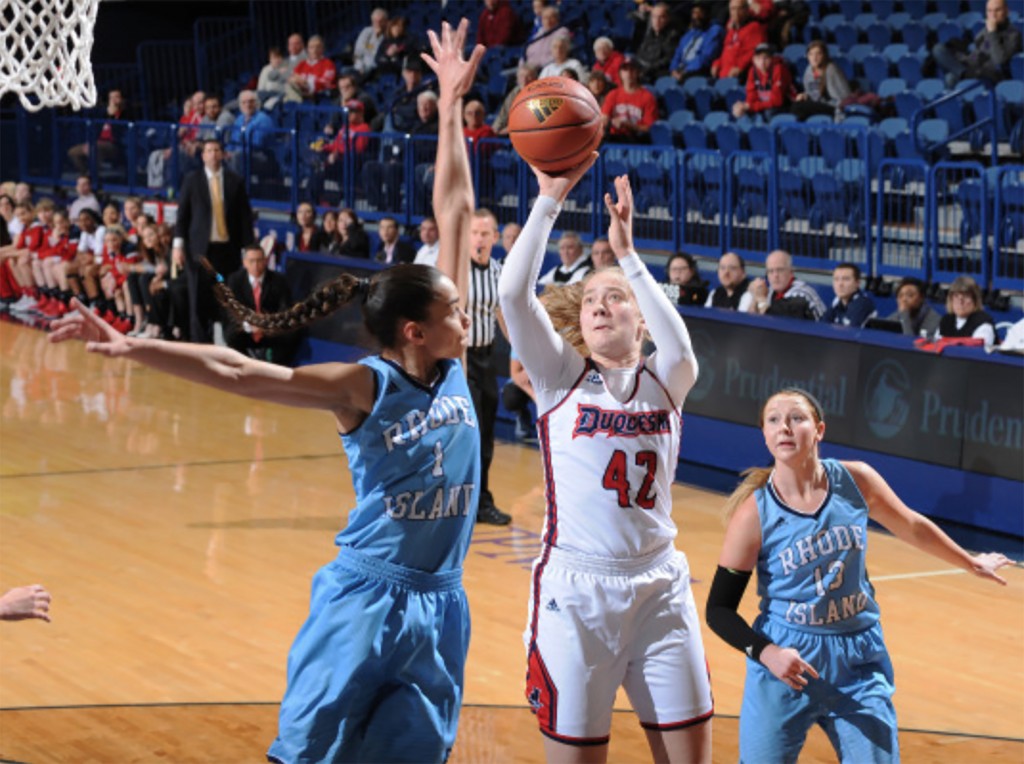 Duquesne (15-15, 5-12) fell to Fordham (16-12, 7-10) 78-69 tonight at Palumbo Center in dropping its eighth-straight contest. Senior guards Micah Mason and Derrick Colter led the Dukes with 19 and 17 points, respectively, in their final home game. Senior forward Ryan Rhoomes led the Rams with 15 points and 17 rebounds. Duquesne took a 63-60 lead on an L.G. Gill 3-pointer before Mandell Thomas hit two threes to give Fordham a 66-63 lead with just over four minutes remaining. Thomas ... END_OF_DOCUMENT_TOKEN_TO_BE_REPLACED