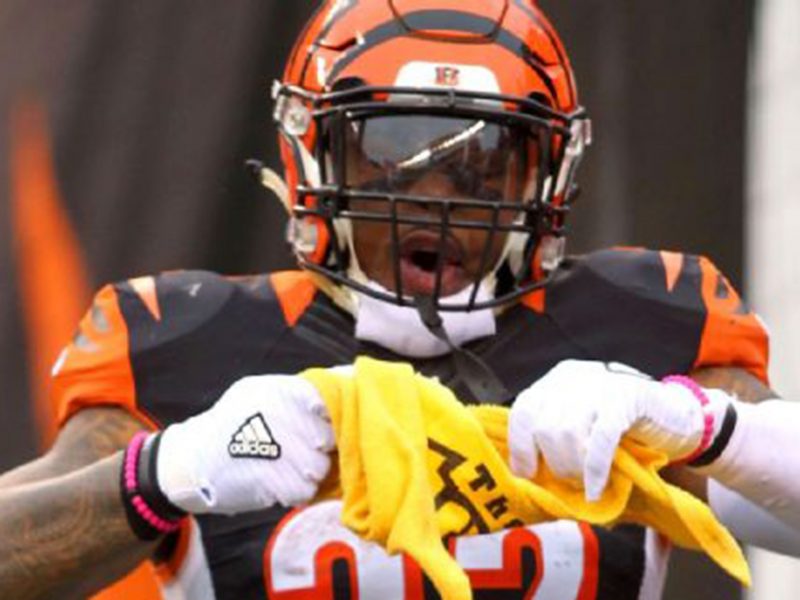 Sunday, Cincinnati Bengals running back Jeremy Hill learned an important lesson the hard way: You don’t mess with the Terrible Towel and get away with it.

After scoring a first-half touchdown on a 4-yard run up the middle to put his team up 17-3, Hill celebrated by picking up a Terrible Towel that had fallen to the turf and trying to rip it in half — twice — before throwing the Towel to the ground.

But then the curse of the Terrible Towel struck.

After rushing for 44 yards in the first half, Hill finished the game with 43 yards — he was held to -1 yard on six attempts in the second half. The Bengals’ offense sputtered, and Pittsburgh outscored Cincinnati 21-3 the rest of the way.

The Steelers end the Bengals’ season.

Hill isn’t the first player to disrespect the Terrible Towel — he isn’t even the first this year. This season, before Washington’s season opener in Pittsburgh, Washington punter Tress Way allowed his mother to burn a Terrible Towel. Washington lost, 38-16.

And this isn’t even the first time a Bengals player has treated the yellow rally towel with disrespect. In 2005, Bengals wideout T.J. Houshmandzadeh wiped his cleats with the towel. Later that season, Cincinnati lost to Pittsburgh in the playoffs, and then-quarterback Carson Palmer suffered a major knee injury on the Bengals’ first drive.

Something similar happened in 2008, when the Tennessee Titans stomped on the Terrible Towel after beating Pittsburgh 31-14. The Titans then lost their next eight games.

In 2009, before the Super Bowl between the Steelers and Arizona Cardinals, the mayor of Arizona acted as if he was blowing his nose on the Terrible Towel (even though Arizona head coach and former Steelers offensive coordinator Ken Whisenhunt asked the mayor not to.) Pittsburgh beat the Cardinals in the Super Bowl.

In 1995, the San Diego Chargers beat Pittsburgh in the AFC Championship game, and several Chargers grabbed Terrible Towels and started waving them around and stomping on them. San Diego then lost in the Super Bowl to the San Francisco 49ers, 49-26.

And in a 1994 playoff game between the Steelers and the Cleveland Browns, Browns running back Earnest Byner stepped on the towel and yelled “We don’t care about your towel, we’re going to beat you this time.” The Browns, however, didn’t beat Pittsburgh, losing 29-9.

“Anybody that’s grabbed it has had something unfortunate happen,” Steelers offensive lineman Ramon Foster said Sunday. “I hate to say the towel is cursed when you disrespect it, but you can’t do that. That’s too early in the game to be doing that type of stuff. (Hill is) a pro. I’m sure his coaches would talk to him.”

For his part, Hill didn’t seem too fazed by the whole thing, tweeting the following: 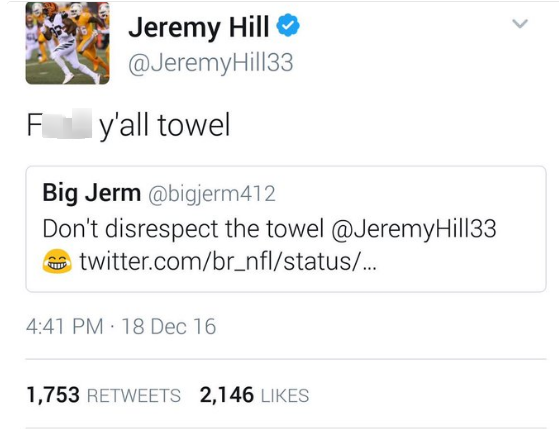 Hill later deleted the tweet and followed it up with one saying he was hacked.