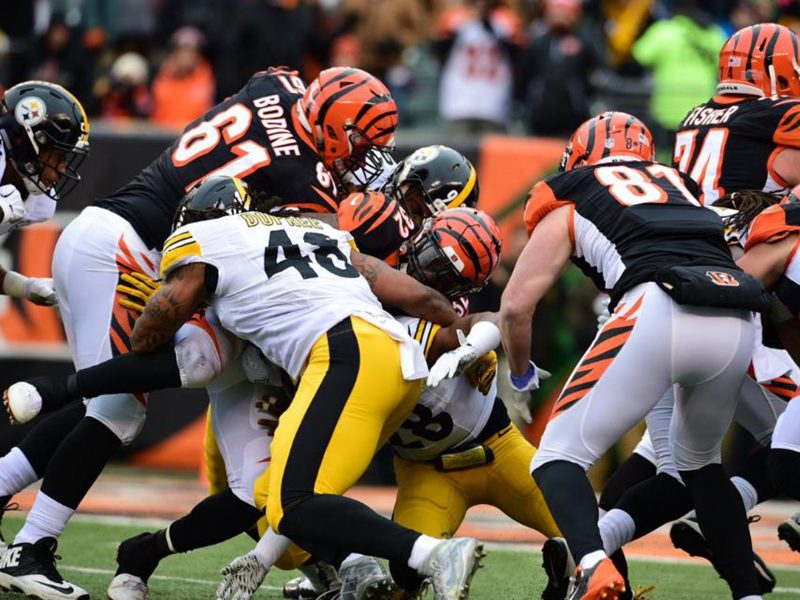 Sunday, the Pittsburgh Steelers beat the Cincinnati Bengals 24-20 despite trailing 20-9 at half. Pittsburgh kicker Chris Boswell went six-for-six on his field goals, Bengals RB Jeremy Hill disrespected the Terrible Towel, and the Steelers won their fifth-straight game to stay atop the AFC North.

Here are some of the best tweets from the game.

The Steelers-Bengals brawl that’s going to happen within the next 75 minutes should be pretty great.

The Bengals need to get this blown victory over with so they can start the massive brawl.

If you thought the cold would affect @RyanShazier, you would be incorrect. pic.twitter.com/N7vQGwd16K

The new ‘save photo’ feature on Instagram is odd. Saved a topless photo of NFL LB Ryan Shazier from ESPN without realising how?

The Steelers end the Bengals’ season.

Hey @JeremyHill33, Maybe you should think twice next time before you step on a Terrible Towel

When yinzers still complain about Tomlin after that win pic.twitter.com/yJrrje4vLT

At Cinc Bengals practice before Steelers game:
Okay boys, assume the position at the end of our game.
And then Cincy press practicing pic.twitter.com/D56IbPSyJP

Remember that year @WizardOfBoz09 knocked you out of the fantasy football playoffs? #2016

@steelers what the hell I wanted another field goal

@dre_102 the Bengals treat the Steelers the way that the Blue Jackets treat the Penguins. Both want a rivalry with Pittsburgh but can’t win

The nfl refs work for vegas

The refs started giving the Steelers calls after I tweeted the NFL about it. Needless to say, I saved the day. You’re welcome Steelers fans🤗