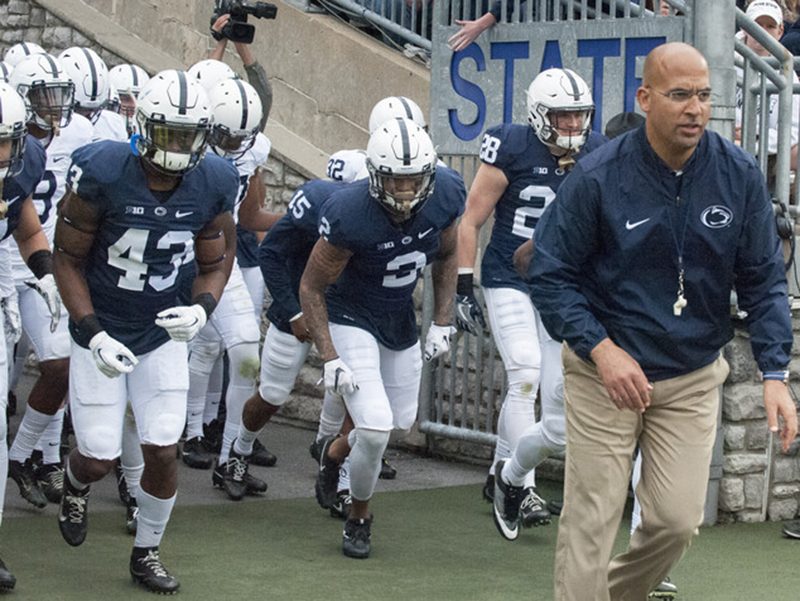 Head coach James Franklin leads the Nittany Lions onto the field for the 2017 Blue White-Game. (Photo by: Patrick Mansell)

Here are the game’s “Cheers and Jeers.”

Stevens solid with the Blue team

The 2017 Blue-White game allowed Stevens the chance to shine alongside many of the first-team members of his offense. He found running back Andre Robinson on a swing pass in the third quarter to put the Blue team up 13-0 after the extra point.

In the fourth quarter, Stevens followed that touchdown up with a a 31-yard pass to wide receiver Brandon Polk that the receiver tipped to himself before stumbling into the endzone to put the Blue squad up 20-0 following a Tyler Davis extra point. Stevens went on to finish 17-24 for 216 yards and three touchdowns.

While McSorley played the entire second half, running back Saquon Barkley and tight end Mike Gesicki failed to see the field. Fear not, this was entirely by design as Franklin didn’t want to run the risk of injuring two of his big time players in the spring game.

As this post was being written, there were no known injuries stemming from the Blue-White game, which bodes well as Penn State heads into summer workouts.

No football until August

With the Blue-White game finishing the spring practice period, we must now wait until August before the Nittany Lions hit the field. The team will break for the summer following the end of classes in the spring semester and will be back when camp begins in August.

August’s training camp will be the lead up to Penn State beginning the 2017 campaign as the defending Big Ten Champions.

Yours truly failing to catch a punt

It was fun, but it didn’t go so well for me.

The highlight of the game comes on that pass from Stevens to Polk.

Brandon Polk somehow came down with this grab for Blue's second touchdown of the day. pic.twitter.com/vOtLbczV7P

With the ball at the White team’s 26-yard line, Stevens dropped pack to pass and threw a dime hitting Thompkins in stride for 50-yards before the wide receiver stepped out of bounds.

The Nittany Lions will next take to the the field September 2nd when they take on Akron in their season opening game.