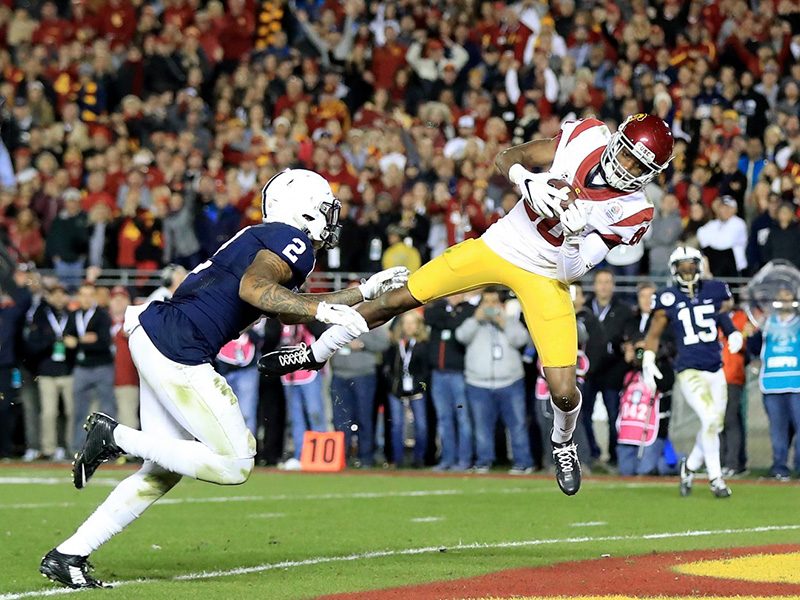 Deontay Burnett hauls in a 27-yard touchdown with 1:20 left in the fourth quarter to tie the game. (Photo by: Sean M. Haffey/Getty Images)

PASADENA, CA — The No. 5 Penn State Nittany Lions (11-3, 9-1 Big Ten) were unable to secure another come-from-behind victory this season, falling to the No. 9 USC Trojans 52-49 in the Rose Bowl Game presented by Northwestern Mutual Monday evening at the Rose Bowl Stadium in Pasadena.

Here are the game’s “Cheers and jeers.”

Quarterback Trace McSorley has been at the helm of the Nittany Lions’ offense for a full calendar year after first appearing in the TaxSlayer Bowl against Georgia last year. It was in that game that the legend of Trace McSorley was born and that a dynamic duo of he and wide receiver Chris Godwin began to blossom.

This year’s Rose Bowl was a flashback of sorts to the 2016 TaxSlayer Bowl with McSorley and Godwin finding each other early and often throughout the game. The first half saw the duo combining for a 115 yards and a touchdown — not too shabby! But it was on the second play from scrimmage in the second half where magic happened.

Chris Godwin. One night only. Tip your waitresses and bartenders. pic.twitter.com/XedA6xVUov

Godwin caught the tip and took it the rest of the way to the house for a 72-yard touchdown. The duo finished the day accounting for seven touchdowns.

Running back Saquon Barkley is incredibly fun to watch. It seems as though any time he gets the ball there’s a highlight waiting to happen — and on the biggest stage, he didn’t disappoint. The sophomore running back found himself as the 0ffense’s focal point early as McSorley struggled (see his 79-yard rush below.)

Barkley had 36 of the 38 yards Penn State’s offense had in the first quarter before the offense began to click in the second quarter. The Big Ten Offensive Player of the Year finished with 249 total yards and three touchdowns.

The first five minutes of the second half:

The Nittany Lions had only three plays in the first three-plus minutes of the second half, and all three plays went for touchdowns. Barkley got it started with his 79-yard touchdown rush to start the half before McSorley and Godwin found each other for 72 yards on the next Nittany Lions possession.

Brandon Bell picked off a Sam Darnold pass on USC’s next drive and took it to the Trojans’ three-yard line before McSorley took the ball in himself for the third touchdown.

Between the second and third quarters, Penn State scored 49 points.

The first five minutes of the game:

McSorley came into the Rose Bowl having thrown only five interceptions on the season, but his first two passes in this game both found Trojan defenders. The first, on the first play of the game, came on a play where Deandre Thompkins and McSorley weren’t on the same page. Thompkins ran an out route while McSorley threw down field into the arms of USC’s Iman Marshall.

On the second interception, the offense was having success moving the ball before a McSorley pass bounced off the hands of Thompkins and into the hands of USC’s Adoree Jackson. (Thompkins took over playing time in place of Saeed Blacknall, who was suspended earlier this week.)

In the Rose Bowl, McSorley found the Trojans’ defense three times. The redshirt sophomore was under constant duress throughout the game, yet, with his feet and arm, he was able to escape danger until his third and final turnover gave USC what it needed to make a last-second field goal and win the game.

The highlight of the game comes from Barkley.

The sophomore sensation took the first play of the second half 79 yards to the endzone to give Penn State its first lead of the game. It was Barkley’s second of three total touchdowns on the day.

Penn State won’t see the field again until April 22nd when the team holds its annual Blue-White Game to mark the end of spring practice. The Nittany Lions could, however, move down in the 2017-18 preseason rankings as a result of their performance tonight.