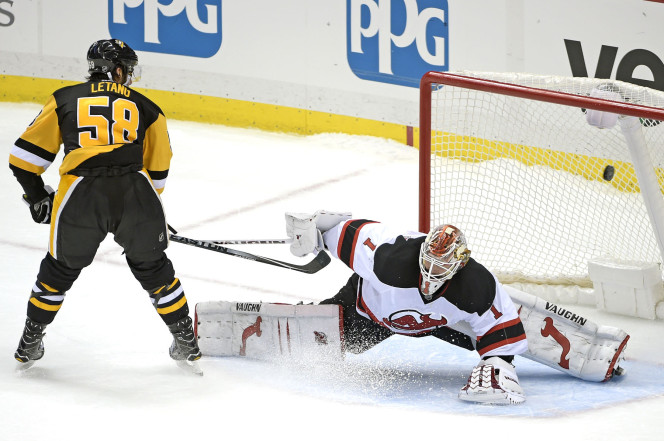 Sidney Crosby is the Pittsburgh Penguins’ (13-6-3) hero after a stellar performance on the ice. With just 14 seconds left in the game, he scored a goal against the New Jersey Devils (16-6-5) to send the game into overtime.

The teams then went into a shootout tied at 3-3. In the shootout, Kris Letang scored the only goal to lift Pittsburgh to the 4-3 win.

New Jersey got the first goal of the game off the stick of Michael Cammalleri (his sixth goal of the season.) The Penguins were able to get on the board in the second period with a goal from Jake Guentzel (3) and a filthy Tom Kuhnhackl (1) goal that left New Jersey goalie Keith Kinkaid defenseless.

Unfortunately for the Penguins, goaltender Matt Murray allowed another two goals that left the game at 3-2 until Crosby decided to be, well, Crosby. Somehow wide open just feet away from the net, the captain nabbed the rebound and ripped it past Kinkaid.

Although the Penguins have been in a bit of a rut between winning and losing games, tonight was a good example of how Pittsburgh plays when the score is close. While New Jersey was able to do a good job of limiting the Penguins’ offense, the Devils couldn’t hold up for the entire game.

The team also played better this evening as a whole. The defense, while still slipping up a bit, looked much more focused and prepared to play a game. Last time out (against Minnesota), Pittsburgh’s defense looked terrible.

Murray’s performance, after allowing his third goal, elevated and slammed the door on the rest of the Devils’ scoring chances.

Evgeni Malkin, the Penguins’ extra man with an empty net, had a vital role in Crosby’s goal. He clogged up the traffic in front of the net, and Kinkaid was unable to eye down the puck before it was too late.

Malkin’s big frame halted most of New Jersey’s sticks and kept the Devils from being able to react quickly to the rebound or to Crosby’s ensuing shot.

Tonight isn’t a fluke of any kind. Crosby has been on a hot streak lately, notching 10 points in the last 10 games. His game-tying goal not only gave his team a chance to get some much-needed points, it showed Crosby has a lot more game left in him.

A year ago, many fans questioned Crosby’s enthusiasm, passion and overall ability after a pretty bad start to the season. This year, however, Crosby has reemerged as one of the league’s best.

Dishing the puck is only half of his game, but, recently, it seems like Crosby has gotten back that goal-scoring step that was slightly missed last year.

“I think Sid is the best in the league in front of the net because he has such a great stick,” said head coach Mike Sullivan following his win against the Devils.

He continued: “(Crosby) can pull the puck through traffic, out of people’s feet and through sticks and still has the poise and presence of mind to make the right play to score.”