Home / NHL / PENGUINS / Penguins, Murray get blown out in 7-1 loss to Blue Jackets 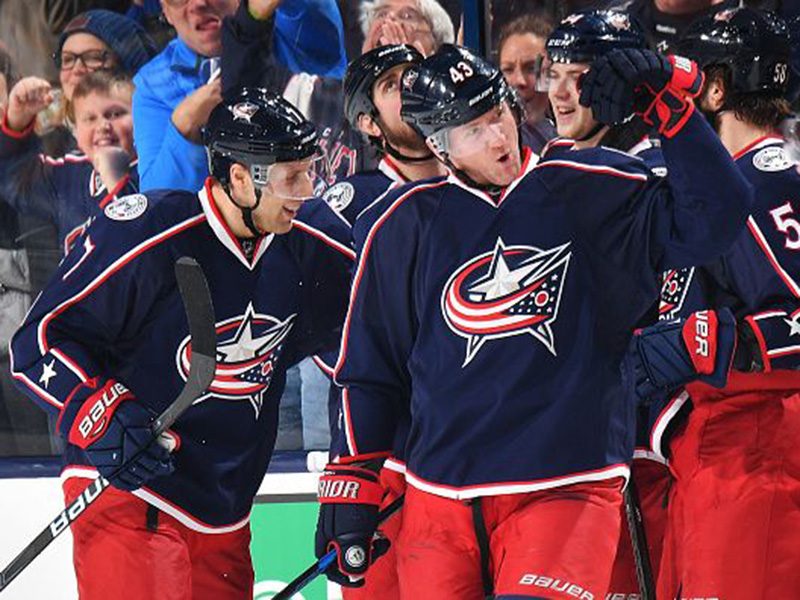 With the 7-1 win over the Penguins, the Blue Jackets took the lead in the Metropolitan division. (Photo by Jamie Sabau/NHLI via Getty Images)

After a 7-1 win in the Pittsburgh Penguins’ last game out against the New York Rangers, the roles were reversed Thursday night when the Penguins (21-8-5) went on the road to play the Columbus Blue Jackets (22-5-4). Going into the third period, Pittsburgh trailed just 3-1, but by the end of the period, the Penguins allowed had four goals in their 7-1 loss.

WIth the win, Columbus took over first place in the Metropolitan division.

Sidney Crosby was one of Pittsburgh’s lone bright spots in the big loss, scoring his league-leading 23rd goal of the season to put the Penguins up 1-0 early.

But goaltender Matt Murray had a disastrous game, allowing six goals on 23 shots, a save percentage of just .739. He was replaced in net by Marc-Andre Fleury, who, in 16-and-a-half minutes, faced five shots and made four saves.

Another reason for the demoralizing defeat is the fact that Columbus chased after the puck all game and finished with 11 takeaways. The Blue Jackets’ intensity just couldn’t be matched and propeled them to their 11th straight win.

Not only was Pittsburgh outshot 28 to 26 Thursday night, but Columbus netminder Sergei Bobrovsky had an outstanding night against one of the league’s top-flight offenses. Additionally, the Blue Jackets’ powerplay was able to get a goal in four chances, while the Penguins failed to score on all three of their opportunities.

While Crosby scored the game’s opening goal, not much else stood out for Pittsburgh. The defense looked a bit sluggish, and the offense didn’t look like the one that just scored seven goals.

The Penguins seem to go back and forth between winning big and losing big, which could be a troubling sign but isn’t yet a cause for concern. Credit must be given where credit is due, and, Thursday night, Columbus came out and put in work.

The Blue Jackets looked very confident against Pittsburgh and really knocked the Penguins’ teeth in. At the end of the day, it really just looked like Columbus came to play and was well-prepared for the task at hand.

With the Blue Jackets win this evening, the Metropolitan division will only tighten up more as the new year approaches.

This is a game where head coach Mike Sullivan must hold his team accountable for its lack of fight in the game. But, at the same time, it’s a game that helps bring Pittsburgh down to earth. Of course, wins are what makes a team a championship contender, but, sometimes, big losses can help teams bounce back to reality and help get them back on their feet.

For the Penguins, the 7-1 loss was a big lesson. But the next time out, expect a much different Pittsburgh team. Thus far this season, the Penguins haven’t dropped two games in a row, and they’ll try to continue that trend when coming back to play at home Friday.

After this loss, the Penguins will be play one more game before taking a short break for the holidays. Their next game will begin at 7:00 p.m. EST this Friday at PPG Paints Arena against the New Jersey Devils.