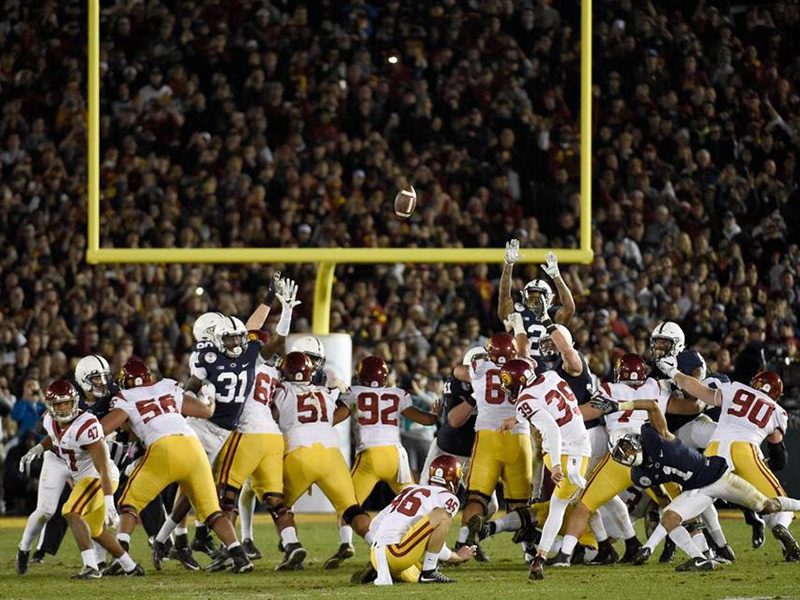 PASADENA, CA — The 103rd edition of the Rose Bowl was an instant classic, with more ups-and-downs than a ride at Disneyland — but the Penn State Nittany Lions were unable to come out on top. The Nittany Lions fell to the USC Trojans as the Men of Troy made a 46-yard field goal as the clock expired to win 52-49 Monday evening in Pasadena.

“These guys should have their chin held high, their chest out, because what we’ve been able to accomplish this year from the beginning to the end is really the story,” head coach James Franklin said following the heartbreaking defeat. “I mean, tonight obviously was a small sample in what may have been the most exciting Rose Bowl game ever.”

Penn State quarterback Trace McSorley threw interceptions on his first two passes of the game, one on a miscommunication with DeAndre Thompkins and the other on a pass that bounced off the hands of Thompkins and into the arms of USC’s Adoree’ Jackson.

Following the two interceptions, McSorley and the offense settled in and put on a show.

Running back Saquon Barkley found the endzone for Penn State first, on a 24-yard run just over three-and-a-half minutes into the second quarter. The Trojans found the endzone on their next drive, following a Sam Darnold 3-yard touchdown pass to Deonta Burnett to keep a 13-point cushion.

On the next drive for the Nittany Lions, McSorley found wide receiver Chris Godwin for the first of Godwin’s two touchdowns on the evening. The 30-yard touchdown pitch-and-catch got Penn State within three points before Darnold found Darreus Rogers for another three-yard touchdown reception.

The scoring in the second quarter didn’t stop there, however. On the Nittany Lions’ next possession, McSorley found tight end Mike Gesicki for his lone reception of the game: an 11-yard touchdown. Gesicki’s touchdown put Penn State within six points entering the half and kept them well within striking distance for an all-too-common surge from the Nittany Lions in the second half.

Penn State got the defensive stop the team desperately needed on the first possession of the second half, forcing a three-and-out for the first time all game. On the first play from the Nittany Lions, Barkley took the ball 79 yards to the house to give Penn State its first lead of the ball game.

“(Offensive coordinator) coach Moorhead and the offensive guys made a great call. The O-line blocked it perfectly and got me one-on-one with a guy, and I was able to make him miss,” Barkley said of his touchdown run. “I was just satisfied to get in the end zone, because I feel like we started to turn it over early in that game.”

With the three-and-out and the touchdown, it seemed as though momentum was back on Penn State’s side.

“We were able to — getting the three-and-out to start the second half, getting them the punt for the first time in the game was big.” Franklin said. “We go right down and score, got the momentum back.”

Following another three-and-out for the Trojans, McSorley found Godwin for his second touchdown. Godwin demonstrated his tremendous hand-eye coordination, hauling in a pass tipped by a cornerback and taking it the rest of the way to the endzone.

The Nittany Lions got the ball right back after Brandon Bell intercepted a tipped Darnold pass, and they returned it to their three yard line before McSorley took it in himself.

Those three offensive plays that resulted in three touchdowns are the exact definition of offensive efficiency.

USC found the endzone for its lone touchdown of the third quarter by way of a 13-yard pass from Darnold to JuJu Smith-Schuster to cut Penn State’s lead to 42-35.

McSorley found Barkley out of the backfield for a touchdown on Penn State’s seventh straight possession (this time the for seven yards). The Barkley touchdown put the Nittany Lions up by 14 points heading into the final quarter of play.

USC’s Ronald Jones found the endzone on a three-yard rush to pull the Trojans within a touchdown as the Nittany Lions’ offense spit and sputtered down the stretch. While Penn State’s offense was struggling to move the ball late, USC’s offense was boosted by two costly pass interference penalties on the Nittany Lions that helped set up Darnold’s record-setting, fifth touchdown pass of the evening, this one to Burnett for 27 yards.

With that touchdown and the game tied, McSorley got the ball one last time looking to get Penn State the victory. McSorley looked Gesicki’s way on his first pass of the drive, however, the ball was severely underthrown and got tipped, nearly being picked off by a Trojan defender.

On McSorley’s next throw, the redshirt sophomore wasn’t nearly as lucky. McSorley looked to find Godwin on the USC sideline, however, that pass was also underthrown and, instead, found the Trojans’ Leon McQuay.

Darnold and the offense started at the Penn State 28-yard-line, setting up a last-second Matt Boermeester field goal. The 46-yard field goal went straight through the uprights as the clock expired.

A tough way to end the season

“Any loss hurts, no matter if it’s Week One or Week 17,” an emotional Barkley said of the loss. “The reason why this one hurts to me the most is what these seniors have done for this program and looking up to those guys. And that’s a big reason why I even came to this school. … Coach Franklin and the seniors did a really good job of keeping this program alive, and I just wanted to send them off — we, not myself, the team — wanted to send them off on the right note. We fell short of that today. That’s why to me this loss hurts so much.”

While losing is never the goal of any team, what this senior class went through over the past few seasons, — dealing with coaching changes, sanctions and a rash of injuries — means this loss isn’t defining and isn’t the end of the world by any means.

The future is very bright

Penn State boasted one of the youngest rosters in all of college football during the 2016-17 season, and many of those young guys will be back for more in 2017-18 as a result.

“With the young men that we’ve got in this locker room and the staff that I’ve been fortunate enough to surround myself with, the support that we’ve gotten from President Barron and Sandy Barbour, our athletic director, if we just realize we’ve got a great opportunity right now and capitalize on it, keep working, you know, I think we can continue to build this thing and continue to do special things,” Franklin said.

Barkley and McSorley will both return for the Nittany Lions in the fall, and Barkley, in particular, is looking to make the most of this loss to the Trojans and what the team has learned from their seniors.

“I do think that we can learn from the seniors. The seniors have done a tremendous job for us leading the way, paving the way for us,” Barkley said. “Obviously, this loss sucks, but use it as motivation in the off-season. We were so close to being Rose Bowl champs, and we still have so much work to do, and we’re still a young team with a lot of guys coming back, so use that as motivation and try to be the best team we can be next year.”

And while Barkley & Co. are gearing up to make next year even better than this season, Franklin and his staff are still focused on the process developing men on and off the field.

“There is a greater purpose for this,” Franklin said. “Wins and losses are a big part of that, but the greater purpose is to make sure these men leave here educated men and prepared for life. … That’s what college athletics is about. It’s about preparing young people, allowing them to be in situations to overcome adversity and preparing them to go on and be successful in life. And that’s what we’re going to do at Penn State today — and always will.”