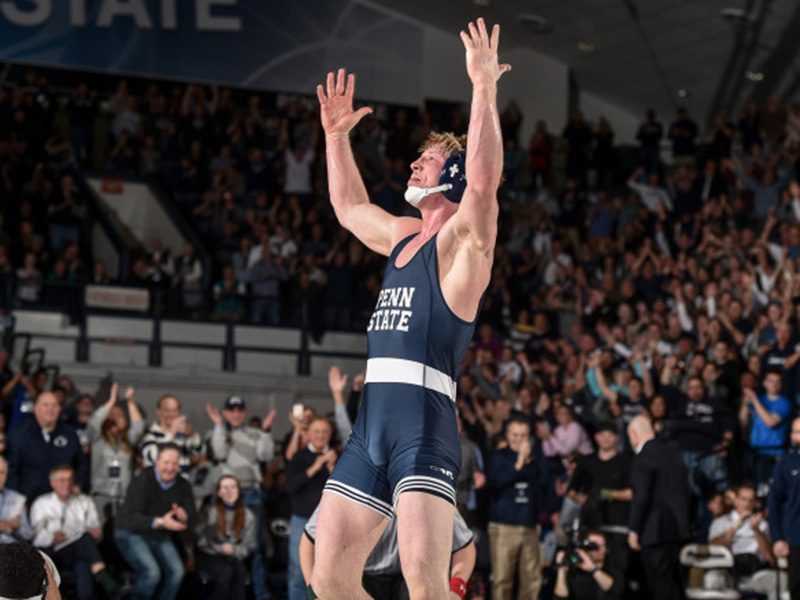 Bo Nickal beat Cornell's Gabe Dean for the NCAA title at 184-lb. With the victory, Nickal was named 2017 NCAA Championships Gorriaran Award winner for the most falls in the least amount of time (three in 11:07). (Photo by: Mark Selders)

Over the weekend, the Penn State men’s wrestling and men’s ice hockey teams won and showcased some big-time hardware.

On the ice, the Nittany Lions went to double overtime two nights in a row to win the first Big Ten Ice Hockey championship in program history and advance to the NCAA Frozen Four. The wrestlers, on the other hand, took home their sixth national title in seven years.

While men’s hockey coach Guy Gadowsky and his team will continue their pursuit of national glory this Thursday against Union in the Frozen Four, wrestling coach Cael Sanderson and his squad saw their season come to an end in grand fashion in St. Louis, Mo. this weekend.

Sanderson and his group of nine grapplers took to the mats Thursday to begin the pursuit of both individual and team glory at the national level. An injury forced 125-lb Nick Suriano to miss the entire tournament, but the team’s remaining eight members made up for it with a superb performance from the outset.

Thanks to Nevills finishing fifth in the 285-lb weight class, the Nittany Lions had the team title locked up before the remaining five wrestlers got started with their final rounds. Nevills’ loss in the consolation semi-finals would be the last Penn State loss of the weekend.

Due to a fan vote making the 184-lb title tilt the final match of the night, Retherford at 149 got the finals started for the Nittany Lions. The junior got his team off on the right foot, making made quick work of his opponent, Lavion Mayes of Missouri, to cruise to an 18-2 technical fall victory.

Nolf kept the ball rolling for the Nittany Lions at 157 with his 14-6 major decision over Missouri’s Joey Lavallee. The Penn State sophomore was up 6-1 at the end of two periods before unleashing himself in the third period to take down Lavallee four times and cruise to his 14-6 victory to become a two-time All-American. Nolf’s 5-0 performance at nationals helped him finish the 2017 campaign a perfect 27-0.

Up next for the Nittany Lions was an upset special courtesy of Vincenzo Joseph at 165-lb. The redshirt freshman, making his first trip to nationals for Penn State, was tasked with having to take down No.1 seed Isaiah Martinez of Illinois. Joseph and Martinez were neck-and-neck a majority of the match before Joseph escaped in the third period and put Martinez on his back for the pin to notch the upset and his first NCAA title.

Following in Joseph’s shoes was true freshman Mark Hall at 174-lb. Hall took on Ohio State’s Bo Jordan for the NCAA title. Hall got up 3-0 in the second period and never looked back, winning 5-2 over the third-ranked Jordan. Hall finished with 31 wins on the season and became only the third true freshman in program history to make the finals at the NCAA tournament.

In the final match of the night, it was Penn State’s Bo Nickal taking on Cornell’s Gabe Dean for the NCAA title at 184-lb. And the one verse two match-up didn’t disappoint the 19,000 plus fans at the Scottrade Center. Dean went up 2-1 in the first period before Nickal scored a takedown late in the first to take a 3-2 lead. The sophomore stand-out escaped Dean to take a 4-2 lead — and the rest was history as Nickal won 4-3 over the top-seeded Dean. With the victory, Nickal was named 2017 NCAA Championships Gorriaran Award winner for the most falls in the least amount of time (three in 11:07).

Penn State’s performance at the NCAAs was the best NCAA team scoring performance since 2005, when the Oklahoma State Cowboys scored 153 points with five champions.

While the 2017 season ended perfectly for the Nittany Lions, 2018 has the looks of being even better for Sanderson and his squad, which will return eight of the nine wrestlers who went to the NCAA tournament. With the exception of senior Jimmy Gullibon (141-lb), all Nittany Lions who placed at nationals and the injured Suriano will return.

It took 13 periods of hockey for the Penn State men’s hockey team to become Big Ten tournament champions for the first time in program history this weekend at Joe Louis Arena in Detroit, Mich. Gadowski’s youthful squad took down the Wolverines 4-1 in the quarterfinals after being swept by Michigan the previous weekend in Ann Arbor.

The Nittany Lions’ return trip to Michigan didn’t end with the quarterfinals as next up was Minnesota, a team which Penn State lost all four of its regular season contests to. Erik Autio scored the game-winning goal in the second overtime period to clinch a berth in the Big Ten tournament finals. That goal was one of four for Penn State against the Gophers. The Nittany Lions held the lead for a mere 2:43 seconds in the contest, yet they still escaped with the victory to advance to the finals.

Penn State took on Wisconsin in what would, again, be an overtime thriller for the Nittany Lions. Liam Folkes got Penn State on the board in the first period with a goal 15 minutes in. Wisconsin tied the game in the third period to send the game into overtime. There wasn’t any scoring in the first 20-minute overtime session, but 6:43 into the second overtime, Folkes found the back of the net once again. The second Folkes goal sealed the deal for the Nittany Lions and got the team its first title in program history as well as its first NCAA Frozen Four berth.

In only their fifth season as an NCAA hockey program, Penn State has continued its meteoric rise to becoming a national power and will begin their quest for national glory in the Frozen Four beginning Thursday, March 25th against Union.

Should the Nittany Lions come out victorious, they’ll play the winner of Denver and Michigan Tech for the chance to advance to Chicago for the Frozen Four finals.