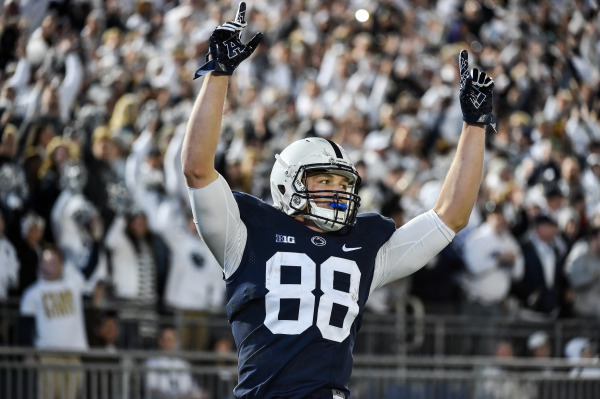 Five years ago this month, the college sports landscape changed forever when a major scandal broke at Penn State. Legends were fired, a former assistant coach was arrested, and a community was shaken to its core.

Restoring the roar in Happy Valley has been a tough and arduous task filled with sanctions, firings, tough losses and coaching changes, but, for the first time since 2011, the Penn State football team and its surrounding community have something to be happy about.

It’s been seven years since the Nittany Lions found their way into the top-10 in a national poll, and they did just that Tuesday night. (Yes, other things went on besides the election.) After landing Sunday at No. 14 in the USA Today Coaches Poll and at No. 12 in the AP Top-25, Tuesday night the College Football Playoff committee deemed Penn State worthy of being No. 10 in its poll.

With three games left on the schedule, the Nittany Lions are in line to play in a New Year’s Six bowl game, as they have been projected to play in either the Cotton Bowl or Orange Bowl — with an extreme long-shot possibility at playing in the Rose Bowl. Should Penn State win out and play in a New Year’s Six bowl game, it would be the first bowl game of that caliber that the Nittany Lions have played in since playing against Southern California in the Rose Bowl in 2009.

For a program with a storied tradition like Penn State, a premier bowl game should be nothing new. However, this team is lucky to even be in the running. In the summer of 2012, fallout from the Jerry Sandusky child sex abuse scandal continued to have an impact on the Nittany Lions’ football program.

The football program was faced with scholarship losses that forced the program to operate at 65 scholarships (instead of the typical 85), imposed a four-year postseason ban and a five-year probation and vacated the wins from 1998-2011. Student-athletes were also allowed to transfer out of the program to any school they saw fit without penalty.

The scholarship losses were to continue through 2017-18, while the four-year postseason ban was to end at the conclusion of the 2015 season. It took a mere two years for the vacated wins to be given back and for the postseason ban to be lifted. The 2016 season is the first since 2012 that the Nittany Lions have operated with 85 scholarships.

Since the sanctions came down from the NCAA, Penn State has had to continuously deal with critics saying the school didn’t deserve to have a football program. On the field, the Nittany Lions earned an 8-4 record in 2012, followed by three seven-win seasons in a row until this year.

While Penn State has continued to stay above .500, this season’s edition of the Nittany Lions has put the program back in a positive national light for the first time since 2011.

This team, coached by James Franklin, has given the community a reason to be happy, even as the fallout of the Sandusky trial and other issues happen daily in Centre County. This team has risen above all odds to overcome adversity as one of the youngest teams in the country, and it even managed a stunning upset of a then-ranked No. 2 Ohio State in Happy Valley in front of a home crowd of 107,000 people.

Following the win over Ohio State, Franklin said,“We’re never going to make it winning at all costs. We’re going to do it the right way here at Penn State, always have, always will.”

This team has helped give hope to a fan base that has been desperate for something to be happy and cheer about. Sure, this team got beat by 39-points to rival Michigan, but since then? The Nittany Lions have won five games in a row.

This team and its players believe in themselves as individuals and as teammates — and that’s gotten this group to where it is today. While the season is far from over, this 2016 Penn State Nittany Lions football team is a team that players and fans can be proud of.

While this year’s team might not win a Big Ten championship or a National Championship, it will go down as the team that has restored the roar in Happy Valley, no matter what happens in the team’s next three games.