Home / NHL / Pens get Malkin back, lose Downie for final meeting with Flyers 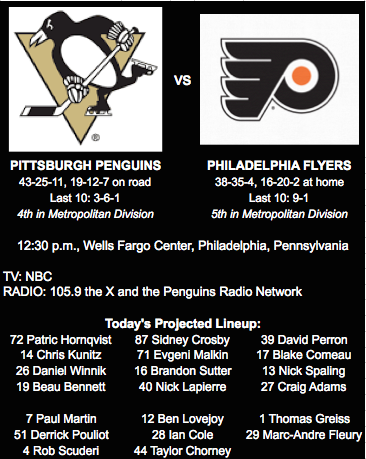 As has been typical of the Pittsburgh Penguins 2014-15 season, as soon as they get one player back from injury, they lose another one. When the Penguins visit the Philadelphia Flyers this afternoon, center Evgeni Malkin will make his return to the Penguins lineup after missing the last two games with a nagging injury.

Missing in action will be right-winger Steve Downie, who is out for today’s game and is day-to-day with an upper body injury.

Downie did not appear to be injured during Saturday’s 5-3 loss to the Columbus Blue Jackets. He played 13:13, including taking the final shift of the game. In three games against the Flyers earlier this season, Downie had one assist and 13 penalty minutes. 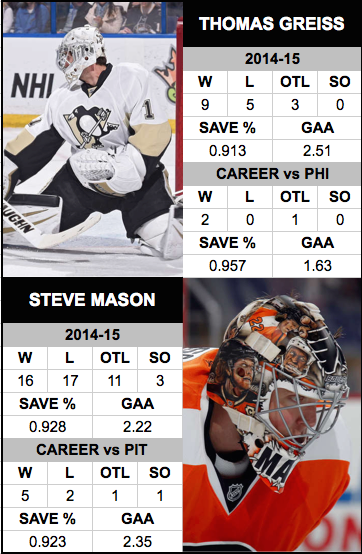 Because the Penguins still don’t have 18 healthy skaters on the roster, emergency call-up Taylor Chorney will again be allowed to dress for today’s game. Chorney played 12:53 yesterday and was even with one shot and one hit.

TODAY’S OPPONENT: This will be the final meeting between the Penguins and Flyers in the 2014-15 season. The Flyers are in a position to sweep the season series for the first time since going 6-0-1 against the Pens in 1985-86. The Flyers have won seven straight games against the Pens, dating back to October of 2013.

THE 4077: Head coach Mike Johnston also provided some other injury updates before the game today.

Defenseman Kris Letang (concussion) is now on pace to start riding an exercise bike this week back in Pittsburgh. There is no timetable for Letang to return to action at this point.

Fellow defenseman Christian Ehrhoff has begun skating back with strength and conditioning coach Mike Kadar and Pittsburgh, but he will not make the trip to Ottawa on Tuesday. The earliest he would rejoin his teammates would be for Friday’s home finale against the New York Islanders. 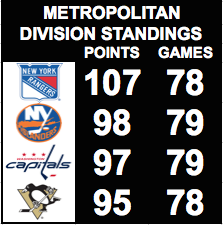 SCOREBOARD WATCHING: The playoff picture in the Eastern Conference is starting to come into focus. The New York Rangers have clinched their first Metropolitan Division title with a 6-1 victory over the New Jersey Devils last night. The Rangers are looking like a solid bet to be the top seed in the east, as they lead the Montreal Canadiens by three points and have a game in hand.

The Canadiens and Tampa Bay Lightning have both clinched playoff berths in the Atlantic Division.

For the wild cards, it will come down to three teams. The Penguins and Boston Bruins are currently tied with 95 points and the Ottawa Senators have 92. The Pens and Senators have four games remaining, while the Bruins have just three. The Penguins magic number is five, meaning any combination of five points earned by the Penguins or lost by the Senators gets the Pens into the postseason.

MINOR MATTERS: Wilkes-Barre/Scranton (40-23-7, 2nd in AHL East) shut out the Lehigh Valley Phantoms last night. Matt Murray made 21 saves for his 11th shutout of the season. Scott Wilson scored two goals, including the game-winner, and Tom Kostopoulos had two assists.

The Wheeling Nailers (33-33-2, 5th in ECHL North) lost another critical game, this time dropping a 5-2 decision to the Kalamazoo Wings, and have now lost three straight games. Franky Palazzese took the loss while making 35 saves. Adam Krause scored his first pro goal. Derek Army also scored for the Nailers, who are now three points behind Cincinnati with a game in hand.