Home / NHL / Pens will play a man short in Carolina

The Penguins will take on the Carolina Hurricanes tonight in Raleigh, North Carolina, and for the third straight game, they will play with only 17 skaters. This is the first time that it will be on purpose.

On Saturday, the Penguins were playing in Glendale, Arizona when defenseman Christian Ehrhoff was injured in the pregame warmups and was unable to play. The Penguins weren’t carrying any extra players on that road trip, and while Ehrhoff was in the team’s lineup, he did not play. 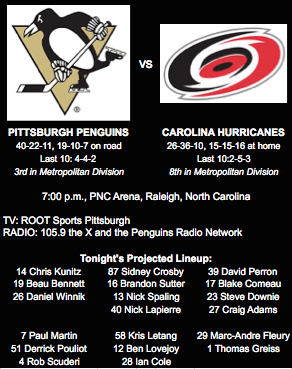 Back at home on Tuesday against the Blues, Ehrhoff was deemed to fit play but was rocked by a Vladimir Tarasenko hit and left the game just five minutes into the contest. He appeared to hit his head and left shoulder against the boards as he went down.

Ehrhoff did not make the trip to Raleigh with the team. Coach Johnston classified the injury as “upper body” and he is expected to miss “a few days.” Center Evgeni Malkin (lower body) and right-winger Patric Hornqvist (upper body) are also not with the team in Raleigh, but did participate in practice on Wednesday.

So tonight, the Penguins will dress one player short because they do not have enough cap space to recall a forward from Wilkes-Barre/Scranton of the American Hockey League. They could have placed one of their three injured players on Long-Term Injured Reserve, but that would have required them to miss at least 10 games or 21 days. None of the three injured Penguins are expected to be out that long. 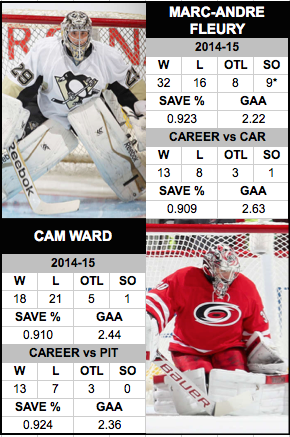 Instead, by playing short a man tonight, the Penguins will be granted an emergency recall by the league. They will be able to bring up one player whose salary is less than $650,000 for the duration of their roster emergency. Center Andrew Ebbett, just sent down earlier in the week, would be the most likely candidate.

TONIGHT’S OPPONENT: The Penguins and Hurricanes have met three times already this season, and while the Penguins have won two of the first three, they shouldn’t feel too confident against a much improved Canes team.

After starting the season 0-6-2, Bill Peters’ squad has come around, and since the Hurricanes and Penguins last met on New Year’s Eve, Carolina is a more-respectable 15-13-6.

This will also be the first time the Penguins see Jordan Staal this season. The former Penguins center missed the first three months of the season with a fractured fibula, but has 18 points in 36 games since his return. He’s skating on the top line for the Hurricanes, alongside his brother Eric, who leads all Carolina players with 19 goals.

The leading point-scorer for the Hurricanes is defenseman Justin Faulk, who has a team-high 31 assists to go along with 14 goals for 45 points.

Although the Hurricanes have played better since their dismal start, all they’ve accomplished is to lose ground in the Connor McDavid sweepstakes. With 62 points, Carolina is currently 26th out of the 30 teams in the NHL, giving them just an 8.6% chance of winning the top spot in the NHL draft and the opportunity to select the Erie Otters superstar. 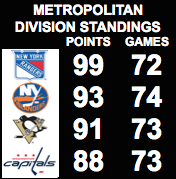 SCOREBOARD WATCHING: The New York Rangers can be the first Metropolitan Division team to clinch a playoff spot tonight when they visit the Ottawa Senators at 7:30 p.m. The second-place New York Islanders are hosting the Los Angeles Kings at 7:00 p.m. and Washington will play the New Jersey Devils, which will also be a 7:00 p.m. start from the nation’s capital.

MINOR MATTERS: The Wilkes-Barre/Scranton Penguins (37-21-7, 2nd in AHL East) will travel to Binghamton, New York to take on the Senators on Friday. The AHL Penguins might see Bryan Rust return to the lineup. The rookie forward hasn’t played since February 21 with an undisclosed injury.

The Wheeling Nailers (30-30-2) got some roster reinforcements on Wednesday, but it wasn’t enough to overcome the first-place Toledo Walleye. The Nailers got back forward Sahir Gill from the AHL’s Hamilton Bulldogs. Gill had a goal and an assist, giving him 16 points in 16 games with the Nailers this season.

They also signed defenseman Mike Slowikowski and goaltender Brandon Whitney, who both played on Wednesday. Eric Hartzell got the start in goal and took the loss, but was replaced by Whitney for a few minutes in the third period. Whitney made one save. Hartzell stopped 30 of 33 while taking the loss.

#CAWLIDGEHAWKEY: Also expected to join the Nailers this week is Robert Morris captain Cody Wydo, who signed his first professional contract on Wednesday. Wydo, 23, is a Hobey Baker Award finalist and is the Colonials’ all-time leading scorer.

The NCAA tournament begins this weekend and two Penguins prospects will be participating. Center Teddy Blueger and the first overall seed Minnesota-Mankato Mavericks will take on the Atlantic Hockey champions, the RIT Tigers, in the first round on Saturday at 4:00 p.m. from South Bend, Indiana. The game will be televised on ESPNU.

Also in the South Bend region are the other Mavericks, the UNO Mavericks. Omaha features center/left wing Jake Guentzel, who was the Penguins third-round pick in the 2013 draft. They will play the ECAC champion Harvard Crimson at 7:30 p.m. on Saturday. That game will be streamed live on ESPN3.