The Pittsburgh Pirates stopped holding onto that losing feeling against the San Diego Padres after a 3-2 victory Tuesday night.

Cashner had a no-decision in his last start which was against the St. Louis Cardinals. Cashner allowed one run on three hits in six innings. He run owns a 1-3 career record with a 0.95 ERA against the Pirates allowing two earned runs in 19 total innings pitched. His 110 hits allowed, 65 runs allowed and nine losses all rank among the National League leaders.

“Cashner is as competitive as anybody in the league on both sides of the ball,” manager Clint Hurdle said. “He’s like Tarzan, the guy’s incredible and we get him tonight. He’s good.”

Barmes touched by gesture Clint Barmes is a huge Journey fan. He used “Don’t Stop Believin'” as his plate music while with the Pirates and now with the Padres uses “Seperate Ways”. Pirates PR decided to pay tribute to their former shortstop and play his old plate music.

Barmes was due up first in the third inning of last night’s game and was going through his usual routine when he noticed the song. He noticeably bobbed his head and flashed a smile. So did Jordy Mercer. Barmes was his mentor.

“I was caught off-guard, but I thought it was well deserved,” Mercer said. “That’s why I had a smile on my face.”

The only former Pirate of recent memory to receive a similar presentation was A.J. Burnett. His presentation was on the scoreboard and drew a similar ovation. Burnett led the applause for Barmes on the Pirates bench on this occasion. 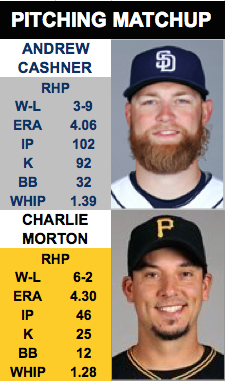 “It was similar for what they did for me and shows what he meant to the team,” said Burnett. “He provided veteran leadership and led by example. He was one hell of a teammate.”

Seventh inning stretch: High winds in and incoming rain caused a one hour 42 minute rain delay. The PNC Park grounds crew had the unenviable task of putting tarp on the field. Andrew McCutchen and Sean Rodriguez each waited by the dugout in case help was needed.

“Lot of wind and not enough help, I might as well stay out there,” McCutchen said.

The high winds caused the tarp to go 41.1 feet into the air and pulled field supervisor Matt Gerhardt into the tarp.

“Usually you see it on the blooper reel where someone gets picked up by the tarp or the tarp goes over,” said Rodriguez. “We just hung out and sure enough the tarp wrapped up one of the grounds crew guys and obviously you’ve got to go help him as much as I could.”

Ultimately many of the players including all of the Pirates relievers helped get the tarp onto the field before heading back inside. Fortunately Gerhardt was only slightly shaken up.

Today the grounds crew paid tribute to Gerhardt with an RIP Tarp Man 7/7/15 etching by third base at the place where he was trapped inside the tarp.

The past five rain delays have totaled six hours and it has created that much more of a challenge for the grounds crew. Hurdle was quick to tip his hat to them.

“They can speak to the level of the challenge, but the fact that we’re playing, you kind of go ‘wow we’re playing’,” said Hurdle. “They get the tarp off, prep the field, dry the tarp and get it ready. You see it’s been challenging at times but those things will happen.  The hours they’ve put in are incredible.”

Pirates minor league pitcher Stephen Tarpley of the West Virginia Power tossed a six-inning no-hitter against Delmarva. Tarpley came to the Pirates in the trade that sent Travis Snider to the Baltimore Orioles… The Pirates lead the major leagues with nine sweeps and a win tonight would mark the first sweep against the Padres since Apr. 12-14 1994… Jared Hughes has made 12 consecutive scoreless appearances… Pirates starters have won 38 games this season which is one win behind the St. Louis Cardinals for best in the major leagues… Jordy Mercer is a .362 hitter in his past 15 games.