PITTSBURGH—The University of Pittsburgh announced its complete 2012-13 men’s basketball on schedule on Monday with tipoff times, additional national, ESPN Regional/Big East Network and local television games. Each event on Pitt’s basketball schedule will be televised nationally or regionally in some form. Updates include:

*ESPN announced on Monday that Pitt’s Outdoor Midnight Madness/Basketball on Bigelow event on Friday, Oct. 12 will be televised in its entirety on ESPN3 along with live updates on its national Midnight Madness Show, which airs on ESPNU. ESPN reporter Bob Picozzi and a color analyst to be named later will be on site that evening to provide live updates and highlights from Bigelow Boulevard.

*Two road contests were also finalized. Pitt will play at Villanova’s Pavilion on Jan. 16 and the Panthers’ contest at Cincinnati on Feb. 9 has been slated as a potential ESPN College GameDay broadcast. Tipoff times for that date are either 6 p.m. (ESPN2) or 9 p.m. (ESPN) if selected for ESPN College GameDay. 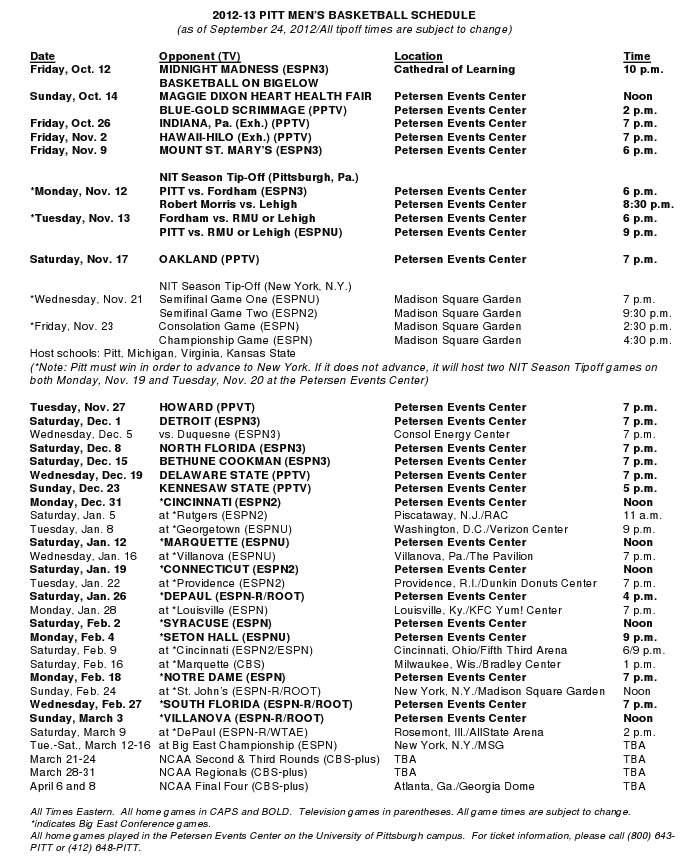