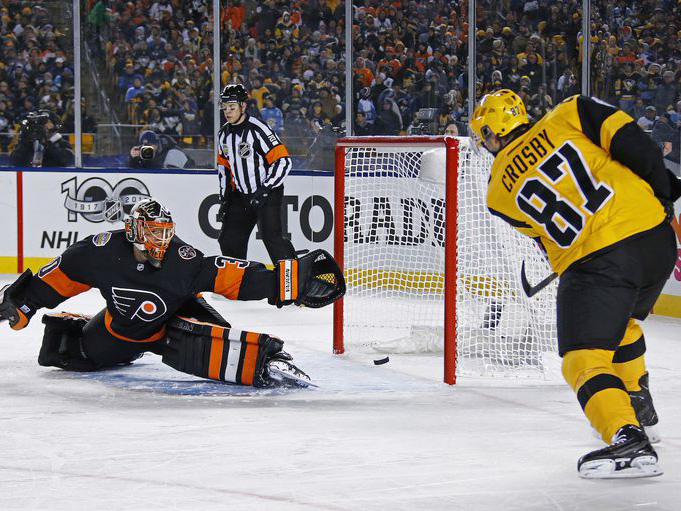 Sidney Crosby got the scoring started in Saturday's Stadium Series game off a nice pass from Jake Guentzel. (AP)

A strong wind was in the air Saturday night at Heinz Field where the Pittsburgh Penguins (38-14-8) took on one of their biggest rivals, the Philadelphia Flyers (28-26-7), in the NHL’s Stadium Series. The seasonal weather dipped into the low 30s with light snow flurries, providing perfect weather for a game with big implications.

Despite back-and-forth play, the Penguins walked away with the 4-2 win thanks to a very adaptable Pittsburgh offense. While the Flyers were looking to take the body and control the pace of the game — something Philadelphia did very well in the second period — the Penguins instead focused on speed and chances at the net.

And it paid off.

Sidney Crosby broke the 0-0 tie with a strike in the first period off a nice a pass from Jake Guentzel. Then, almost seven minutes in the second period, Nick Bonino scored his ninth goal of the season coming from, yet again, another Guentzel pass — this time on a powerplay.

Philadelphia found the net with Jakub Voracek getting his 16th goal this season to make it a 2-1 game. Just minutes into the final period of play, Matt Cullen scored to give Pittsburgh the lead by a pair. But, of course, the Flyers weren’t going to go down without a fight and were able to muscle out a powerplay goal to come within a goal of a tie and a possible overtime.

Both teams began to show signs of fatigue , but the Penguins nudged out the win by two after Chad Ruhwedel scored only his second goal of the season to give Pittsburgh another two-goal lead.

This time, the lead stayed intact, and the Penguins gave their home crowd another classic at Heinz Field.

While the Flyers were the more desperate team considering their current standing in the playoff race (currently just missing the playoffs), Pittsburgh also had something to play for. The Penguins are now five points behind the Washington Capitals for first place in the Metropolitan Division and are two points ahead of the third-place New York Rangers.

With serious implications for both teams, Pittsburgh was mentally prepared for a tough-nosed, hard-hitting hockey game. Between both teams 89 hits were registered, and 67 shots on net were recorded.

Matt Murray played a very good game in net, especially as time went on. The Penguins’ defense wasn’t perfect against Philadelphia, but between the healthy players still on the blue line and Murray, it did just enough to fend off a major rival.

A Tale of Two Cities

The rivalry between any Pittsburgh-Philadelphia sports team always ends up being a fairly physical one, and Saturday night was no different. Things not only got rough but, at one point in the second period, it looked like an all-out-brawl at Heinz Field.

One part of the Flyers’ season that has kept them in playoff contention is a 10-game win streak they collected earlier in the season. But with just over 20 games left to play, Philadelphia has a hill to climb — and it’s even bigger than Cardiac Hill.

Should they fail to make the playoffs, the Flyers would become the first team in NHL history to have a 10-game win streak and not make it to the playoffs. Saturday’s game was just a case of the Flyers looking almost too aggressive.

Although Philadelphia was able to come within a goal of a tie, the team’s desperation began to deplete the Flyers of their energy. The Penguins were able to capitalize and stayed level-headed toward the end of the game.

It’s difficult to follow up a Stadium Series game — especially from the fans’ point of view — but it’s back to PPG Paints Arena for the rest of Pittsburgh’s home games. But next, the Penguins will take a trip down south to play the Dallas Stars this Tuesday at 8:30 p.m. EST.