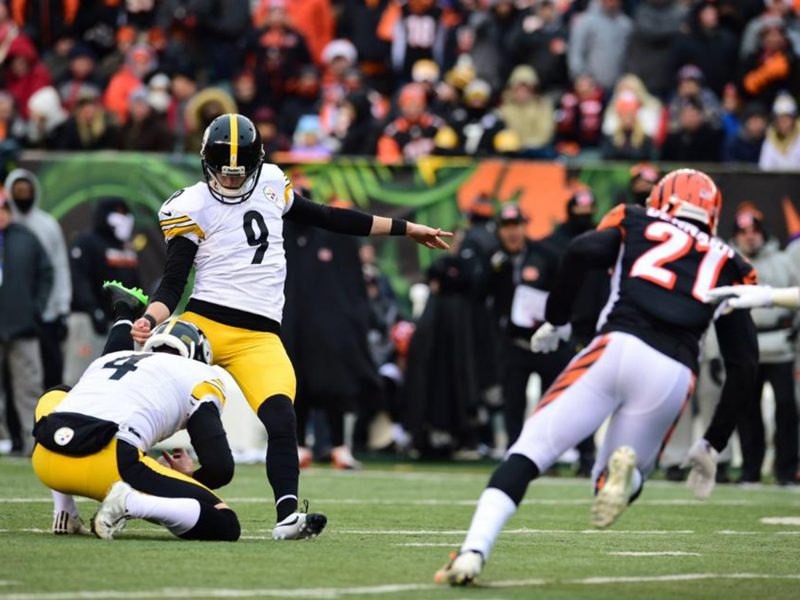 At halftime of Sunday’s game between the Pittsburgh Steelers and the Cincinnati Bengals, the Steelers trailed 20-9, and it looked like the game was going to end up being another head-scratcher for Pittsburgh and its fans.

In the first half, how could the Steelers, one of the league’s most lethal offenses, only muster 132 yards and nine points (off three field goals)? How could Le’Veon Bell, a legitimate MVP candidate who had a monster first half last week, only rush for 29 yards in Sunday’s first half? How could a Pittsburgh defense that allowed 14 total first-half points over the last four weeks give up 20 first-half points to a Bengals offense still missing AJ Green?

But the Steelers overcame a lot — a 14-point deficit; 104 penalty yards; the loss of Stephon Tuitt (knee) and Ladarius Green (concussion); and an out-for-blood Cincinnati defense highlighted by Vontaze Burfict — to beat the Bengals 24-20 for Pittsburgh’s fifth-straight win. The win came, in large part, thanks to kicker Chris Boswell, who was six-for-six on field goals.

While Pittsburgh’s defense got off to a bit of a slow start — made all the much worse by defensive standout Tuitt leaving after the game’s third snap with a knee injury — it made up for it in the second half. After halftime, the Steelers’ defense shut out the Bengals and limited them to a measly 38 yards and just four first downs. It seemed as if Pittsburgh figured out how to create pressure, and the defense did a good job of keeping Bengals quarterback Andy Dalton in the pocket and of forcing him to make throws into coverage.

In the third quarter, linebacker Lawrence Timmons came up with a key pick of Dalton, who was 6 for 11 for 41 yards in the second half. And Bengals running back Jeremy Hill had -1 yard on six carries in the second half. (Guess that’s what happens when you mess with the Terrible Towel.)

“Second half, we just came out and we executed. Perfectly,” said nose tackle Daniel McCullers. “We did our jobs and we stopped the running game, and we made plays against the pass.”

But as much of a story as the defense was, for much of the game it seemed like penalties were the real story.

On the Bengals’ first drive, on third down at their own 28, quarterback Andy Dalton was sacked by cornerback William Gay for a loss of eight yards. But Tuitt was called for a face mask, which is a 15-yard penalty and gave Cincinnati an automatic first down and, ultimately, three points.

Still in the first half, the Steelers had a touchdown nullified by a chop block penalty on Bell that moved Pittsburgh back 15 yards, forcing the team to settle for yet another field goal.

But, in the end, it seemed to be the Bengals who were done in by penalties. Late in the game, they committed penalties on four consecutive plays — offsides, holding, holding, unnecessary roughness — that moved Pittsburgh down to the Cincinnati 18 yard line. Two plays later, the Steelers scored their first (and only) touchdown of the game on a 24-yard pass from Ben Roethlisberger to wideout Eli Rogers.

Pittsburgh tackle Marcus Gilbert shook his head when asked if he was surprised that the Bengals were done in by undisciplined play.

“Not at all,” Gilbert said. “It’s the same story. It’s like reading the same book.”

As a whole, the Steelers’ offense was good, if unremarkable for much of the game. However, late in the game, it seemed like Pittsburgh figured out Cincinnati’s Cover 2 defense, and the Steelers attacked the middle of the field.

“We wanted to try to take advantage of the middle of the field,” Roethlisberger said. “We just had to stay patient.”

With the win, Pittsburgh knocks Cincinnati out of playoff contention, and the Steelers remain atop the AFC North (the Baltimore Ravens also won Sunday but own an 8-6 record.)

Pittsburgh can clinch the AFC North next Sunday with a win over the Ravens.