On senior night at 84 Lumber Arena, it was the underclassmen that made the headlines as the Robert Morris Colonials beat the Niagara Purple Eagles by a final score of 2-1.

In goal, Dalton Izyk stopped 31 of 32 Niagara shots to earn his 13th win of the season, but more importantly for the sophomore, he earned a start on back-to-back nights, and is poised to take over the Colonials’ net the rest of the way, supplanting junior Terry Shafer.

“I sure hope so,” said Izyk. “Coach Schooley has put some faith in me and I hope I can carry on.”

Shafer had been the primary starter a year ago for the Colonials, but a hip injury in the first round of the playoffs ended his season prematurely, and Izyk stepped in and took the Colonials to their first NCAA tournament berth.

Throughout the 2014-15 regular season, Shafer and Izyk equally split time in goal. Shafer had a 9-3-4 record with a .930 save percentage, a 2.15 goals-against average and one shutout through the regular season. Izyk had a better record at 12-4, but his peripheral stats trailed Shafer’s, with a .922 save percentage and a 2.60 goals-against average coming into the finale.

“Dalton is a solid goaltender, and he’s just found ways to win games,” said RMU head coach Derek Schooley. “He just wins. He finds a way to get the job done.

“That’s not a knock against Terry Shafer, because Terry has been outstanding. Whatever we decided to do in goal, if it is Dalton, our goaltending is in capable hands.”

On offense, it was another underclassman, freshman Spencer Dorowicz, who got the goal scoring started for the Colonials. At 7:54 of the first period, he deflected an Evan Moore point shot to give Robert Morris a 1-0 lead. It was just Dorowicz’s fourth goal of the season and his first career power play goal.

Purple Eagles sophomore Phil Nasca tied the score at 14:17 of the second period with his fourth goal of the season. From directly in front of Izyk, he deflected a Brock Edwards shot into the back of the Colonials’ goal. Lawrence Smith earned the other assist for Niagara.

Junior center Greg Gibson gave the Colonials the lead right back with a beautiful, bar-down one-timer at 8:18 of the third. Scott Jacklin and Tyson Wilson assisted on the Colonial’s second power-play goal of the game. The effort earned Gibson the game’s first star.

The Colonials’ precarious 2-1 lead held up despite the Purple Eagles earning five third-period power plays. The Colonials had to rely on their penalty killers – and they came up big.

“Our penalty kill did an outstanding job,” said Coach Schooley. “They were put in some tough situations – two five-on-threes, and got the job done.”

Robert Morris finished their 2014-15 regular season campaign with a program-high 22 wins, and seniors Cody Wydo, Greg Gibson, Jeff Jones and David Rigatti were honored as the winningest class in RMU history with 78 victories. 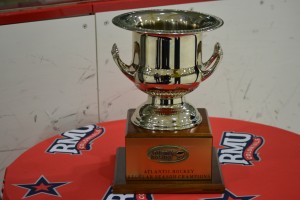 The Colonials got their hands on some team hardware as well on Saturday night, as they were presented with their trophy for winning the 2014-15 Atlantic Hockey regular season championship, the first in program history.

Wydo, the Robert Morris captain, will finish his collegiate career as the young program’s greatest player by far. Wydo is the Colonials’ all-time leading scorer and holds several other team records.

“It’s a great feeling,” said Wydo. “We’re getting top players now. We’ve been nationally ranked almost all year, which is a big change from last year. We’ve been finding ways to win these past couple of years.

“Since last Christmas break, we won the tournament, and now the league championship, and hopefully, we can make another run and go o the (NCAA) tournament again.

The Colonials’ first-place finish in the regular season earned them a first-round bye in the conference tournament, which begins next weekend. Robert Morris will begin the road to the Frozen Four when they host a three-game Atlantic Hockey second round series at 84 Lumber Arena, beginning on Friday, March 13.