Coming into the night off a pair of back-to-back shutouts last week in Alberta, Marc-Andre Fleury had his shutout streak broken at 165:06, but his teammates provided plenty of offense in a four-goal outburst over the first to periods to the lead the Pens past the Detroit Red Wings 4-1 on Wednesday night. Blake Comeau made the most of his first action since Decemeber 22, with a goal, an assist, and earned the number one star skating on the second line with Evgeni Malkin and Patric Hornqvist. ... END_OF_DOCUMENT_TOKEN_TO_BE_REPLACED

For the second time this season, a controversial call at Consol Energy Center lead to a video review of a potentially game-winning goal. In November, the Penguins got a reprieve and were able to beat the Rangers in a shootout. This, time the referee’s call on the ice stood and the Boston Bruins earned the extra point and a 3-2 overtime win. At 2:43 of overtime, Bruins center Patrice Bergeron deflected a Milan Lucic past the blocker of Penguins goaltender Marc-Andre Fleury to seemingly give the ... END_OF_DOCUMENT_TOKEN_TO_BE_REPLACED

It was a happy New year indeed, when the Pittsburgh Penguins beat the Carolina Hurricanes 2-1 on Wednesday night and ended their season high four-game winless stretch (0-3-1). It was the Penguins first home game on New Year's Eve in ten years. Brandon Sutter scored the game winning goal with 1:42 left in the 3rd period, the 14th game-winning goal of his career. Sutter used to play for the Hurricanes, and this was his first goal scored against them. Beau Bennett was back in the Penguins ... END_OF_DOCUMENT_TOKEN_TO_BE_REPLACED 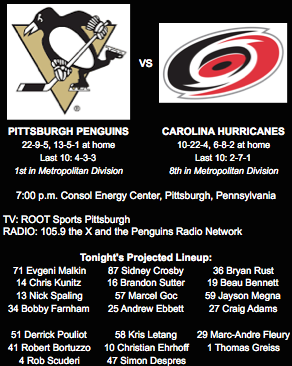 The Penguins have one final chance in 2014 to end their current losing streak, and shake off some of the last few weeks. The Penguins have lost four consecutive games coming into tonight’s matchup against the Carolina Hurricanes, their longest losing streak of the year and longest since January of 2012. Four Penguins are poised to return to the lineup tonight, as forwards Beau Bennett and Craig Adams and defenseman Christian Ehrhoff have been removed from the injured reserve, and Thomas ... END_OF_DOCUMENT_TOKEN_TO_BE_REPLACED

When Evgeni Malkin dropped to the ice against the Florida Panthers just over a week ago, it didn't look good for the reigning NHL MVP. When the Pittsburgh Penguins announced that Malkin suffered a concussion, you could hear Pittsburgh hold their collective breath. 10 days later, the city can finally breath. While Geno practiced yesterday and said he could use a few more practices before returning to the ice, the Penguins announced earlier today that Malkin will be back on the ice at Consol ... END_OF_DOCUMENT_TOKEN_TO_BE_REPLACED