While the Penguins were busy making a big trade to acquire Toronto Maple Leafs forward Phil Kessel, six of the Penguins free agents found other NHL homes. Defenseman Paul Martin, who was interested in returning to the Penguins, instead signed a four-year contract with the San Jose Sharks, according to ESPN’s Pierre LeBrun. Right-winger Steve Downie has accepted a one-year deal for $1.7 million with the Arizona Coyotes per Sportsnet. That is a modest raise from the $1 million contract he ... END_OF_DOCUMENT_TOKEN_TO_BE_REPLACED

The Pittsburgh Penguins signed Blake Comeau as a free agent last summer without much fanfare. He was a 28-year-old veteran that had spent the previous two seasons playing a fourth line role, so the assumption was that he would wind up in the same role with the Penguins, possibly pushing Craig Adams for playing time and working on the penalty kill. He did have a past history of working as a top six scorer, but that was back in his early years with the New York Islanders. His recent ... END_OF_DOCUMENT_TOKEN_TO_BE_REPLACED

Coming into the night off a pair of back-to-back shutouts last week in Alberta, Marc-Andre Fleury had his shutout streak broken at 165:06, but his teammates provided plenty of offense in a four-goal outburst over the first to periods to the lead the Pens past the Detroit Red Wings 4-1 on Wednesday night. Blake Comeau made the most of his first action since Decemeber 22, with a goal, an assist, and earned the number one star skating on the second line with Evgeni Malkin and Patric Hornqvist. ... END_OF_DOCUMENT_TOKEN_TO_BE_REPLACED 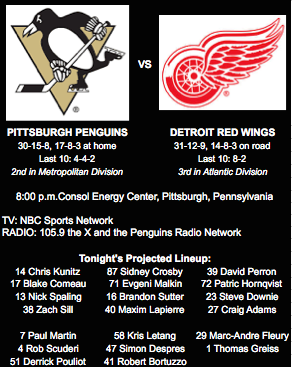 After returning from their three-game Western Canadian road trip with a 2-1 record, the Penguins have enjoyed two days off before hosting the Detroit Red Wings tonight. TONIGHT’S OPPONENT: The Red Wings have won three straight games, and have been off since a 3-1 victory in Arizona on Saturday night. The Red Wings have been without starting goaltender Jimmy Howard since he left the team’s January 10 game in Washington with a groin injury. Interestingly enough, it has been third-string ... END_OF_DOCUMENT_TOKEN_TO_BE_REPLACED

Shortly after Pittsburgh Penguins general manager Jim Rutherford made his first free agent splash of the offseason by inking defenseman Christian Ehrhoff, Rutherford added a couple more pieces on the open market. The new Penguins GM was able to sign forward Blake Comeau to a one-year, $700,000 deal and goaltender Thomas Greiss to a one-year, $1 million deal. The 28-year old Comeau has spent the last season and a half in Columbus where he tallied 21 points (7G, 14A) in 70 regular-season ... END_OF_DOCUMENT_TOKEN_TO_BE_REPLACED