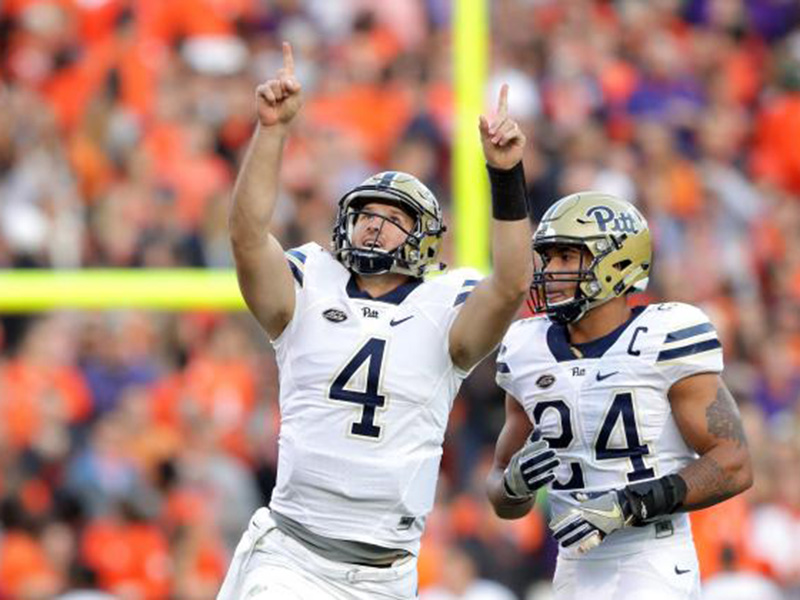 When the kicker has the last name of “Blewitt,” you’d be forgiven for not having much faith in him to hit a long, game-winning field goal with time expiring, especially after he missed an extra point in Saturday’s game. But, Saturday, Pitt's Chris Blewitt didn't blow it when it mattered most, nailing a booming 48-yard field goal with six seconds left to give the Panthers (6-4, 3-3 ACC) the shocking 43-42 win over the No. 2 Clemson Tigers (9-1, 6-1) — perhaps the season’s biggest upset. “I ... END_OF_DOCUMENT_TOKEN_TO_BE_REPLACED

One thing that No. 25 Pitt has been able to do since Pat Narduzzi took over as head coach is close out games. That was on display once again on Saturday at Syracuse. While the defense has closed out a few games to this point, this time it was on the shoulders of the offense. With the game tied at 20 in the fourth quarter, the Panthers went on a 19-play drive that covered 89 yards and milked 9:20 off the game clock. The end result was a 25-yard field goal from Chris Blewitt as time ... END_OF_DOCUMENT_TOKEN_TO_BE_REPLACED

The Pitt Panthers have had at least one player honored by the ACC every week this season. After a big road victory at Georgia Tech to improve the Panthers to 5-1 on the season and vault them into the Top 25, that streak continued this week. Naturally it was the hero of Saturday’s game, placekicker Chris Blewitt who earned the honor, being named Atlantic Coast Conference’s Specialist of the Week. Blewitt converted all four of his extra point attempts and drilled a Pitt school record ... END_OF_DOCUMENT_TOKEN_TO_BE_REPLACED

Much has gone right this season for Pat Narduzzi and the Pitt football program. Thanks to a record-breaking kick from kicker Chris Blewitt that trend continued for the Panthers as Pitt defeated Georgia Tech 31-28 to improve to 5-1 for the first time since the 2009 season. The win also improves Pitt to 3-0 in ACC play, setting the Panthers up very nicely in the Coastal Division race. Pitt (5-1, 3-0 Atlantic Coast Conference) is unbeaten in its first three conference games for the first time ... END_OF_DOCUMENT_TOKEN_TO_BE_REPLACED

For the second consecutive week, the Pitt Panthers football team turned in an impressive performance and for the second straight week they racked up some weekly ACC honors. Sophomore running back James Conner was named the ACC’s Offensive Back of the Week, senior tackle T.J. Clemmings was selected Offensive Lineman of the Week and sophomore placekicker Chris Blewitt was named Specialist of the Week following Pitt’s 30-20 road victory over Boston College. It’s the second consecutive week ... END_OF_DOCUMENT_TOKEN_TO_BE_REPLACED