The Robert Morris men’s ice hockey team is set and ready to begin another season with high expectations. Last season, the Colonials had one of their best seasons in school history, winning an astounding 24 games. Finishing first in the Atlantic Hockey Conference (AHC) for the first time in school history, their season would be cut short in falling to the Mercyhurst Lakers in the AHC semifinals. Head coach Derek Schooley must be given credit for the major turnaround of the school’s hockey ... END_OF_DOCUMENT_TOKEN_TO_BE_REPLACED

It’s been a whirlwind week for the Robert Morris University men’s hockey team. In seven days, they played four games in three different cities across two states and in three different arenas – and one of them wasn’t even an arena. Over 15,000 people attended a Colonials game in that span. On Dec. 29 and 30, they hosted the Penn State Nittany Lions, Colgate Raiders, and Western Michigan Broncos for the third-annual Three Rivers Classic at the home of the Pittsburgh Penguins, Consol Energy ... END_OF_DOCUMENT_TOKEN_TO_BE_REPLACED 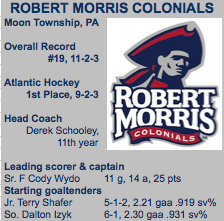 The third annual Three Rivers Classic tournament will once again bring championship-caliber college hockey to Consol Energy Center when the tournament kicks off this afternoon. Host Robert Morris University has brought in an outstanding field this year, with perennial guest Penn State being joined by Colgate and Western Michigan. Today’s semifinal games will pit Western Michigan against Colgate at 4:30 p.m., and Penn State and Robert Morris at 7:30 p.m. The winners will play in the final ... END_OF_DOCUMENT_TOKEN_TO_BE_REPLACED