Robert Morris defenseman Rob Mann is an easy guy to notice. At 6’4”, 220 pounds, the sophomore from Oshawa, Ontario is an imposing physical specimen on the Colonials blue line. Recently, however, it has been his play, not just his size, that has drawn attention. Mann was named the Atlantic Hockey Conference Defensive Player of the Week for his performance in the Colonials’ second-round sweep of the Niagara Purple Eagles last weekend. He led all Colonials defensemen with six blocked shots ... END_OF_DOCUMENT_TOKEN_TO_BE_REPLACED 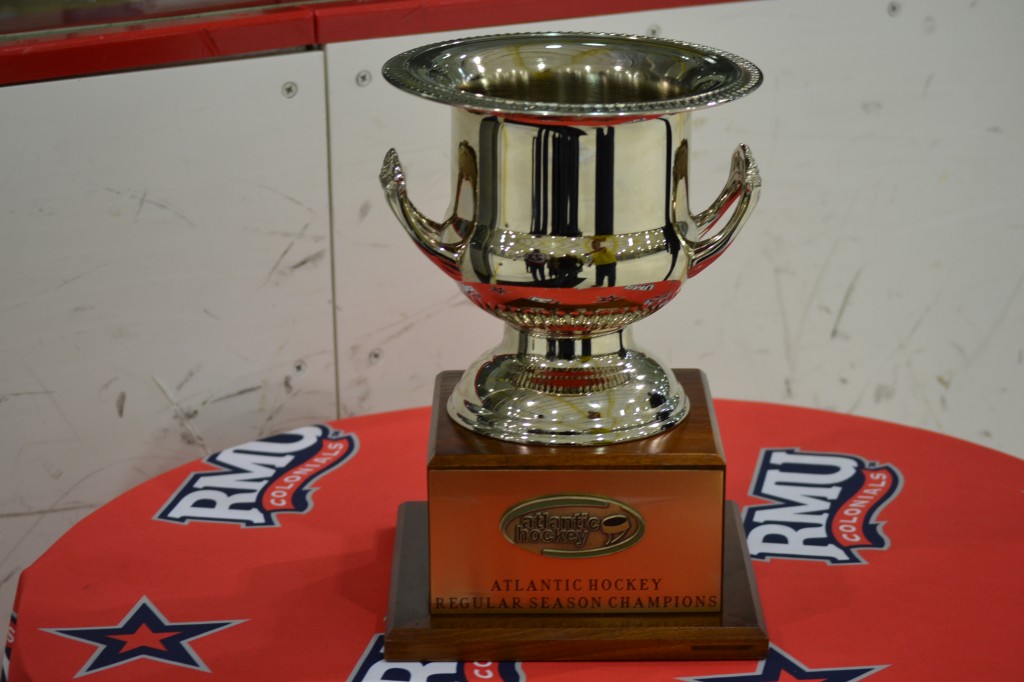 On senior night at 84 Lumber Arena, it was the underclassmen that made the headlines as the Robert Morris Colonials beat the Niagara Purple Eagles by a final score of 2-1. In goal, Dalton Izyk stopped 31 of 32 Niagara shots to earn his 13th win of the season, but more importantly for the sophomore, he earned a start on back-to-back nights, and is poised to take over the Colonials’ net the rest of the way, supplanting junior Terry Shafer. “I sure hope so,” said Izyk. “Coach Schooley has put ... END_OF_DOCUMENT_TOKEN_TO_BE_REPLACED

The Robert Morris Colonials are the hottest team in the nation, having now won seven straight games after beating the Canisius Golden Griffins 2-1 in overtime on Friday night. With just 30 seconds remaining in the overtime period, senior forward Jeff Jones came streaking down the left wing and dangled around a Griffins defender. He faked a shot and then found his center, Greg Gibson, streaking down the slot and hit him or a perfect one-timer that beat Canisius goaltender Keegan Asmundson and ... END_OF_DOCUMENT_TOKEN_TO_BE_REPLACED

Sophomore Dalton Izyk continued his strong season for Robert Morris; stopping all 34 shots as he earned his third shutout of the season as he backstopped the Colonials to a 3-0 victory over the Bentley Falcons on Friday night. Izyk improved his record to 7-3 on the season. The Colonials improved to 13-4-4 overall and 10-2-3 against Atlantic Hockey foes. “Everyone played amazing tonight,” Izyk said. “I just did my job and made a few simple saves.” “Hopefully, we keep it up, because if we ... END_OF_DOCUMENT_TOKEN_TO_BE_REPLACED