In the last decade, the Pittsburgh Penguins have seen some of the most intriguing and high-profile prospects in the entire National Hockey League come through their system. Even as the team's big-time draft picks of the early 2000's turned into NHL stars, the team was still touted for their defensive depth. Those days, however, have passed. Now, after a series of trades and a few players that have moved on to full time NHL positions, the cupboard is once again looking rather bare. Corey ... END_OF_DOCUMENT_TOKEN_TO_BE_REPLACED

The Pittsburgh Penguins have signed their 2015 third-round draft pick, forward Dominik Simon, according to a report by Czech journalist Tomas Vrabel of Denik Sport and confirmed by the Pittsburgh Sporting News. Simon, who will be 21 in August, has been attending Penguins development camp in Pittsburgh this week. “I got a chance to actually watch him over at the World Championships,” Penguins assistant general manager Tom Fitzgerald after practice on Wednesday. “His play and his age just ... END_OF_DOCUMENT_TOKEN_TO_BE_REPLACED 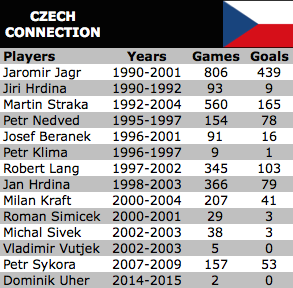 Jaromir Jagr. Martin Straka. Petr Nedved. Robert Lang. Petr Sykora. For the last 25 years, Pittsburgh has been a mecca for Czech forwards in the NHL. Starting with the drafting of Jagr in the first round of 1990, 11 forwards from what would become the Czech Republic have skated in black and gold, accounting for 2,857 games and 990 goals. Six of the top ten Czech scorers in NHL have played for the Penguins and the Penguins had the first – and so far only – Czech head coach in Ivan ... END_OF_DOCUMENT_TOKEN_TO_BE_REPLACED

After grabbing Dutch forward Daniel Sprong in the second round, the Pittsburgh Penguins wrapped up the 2015 NHL draft on Saturday afternoon with three more selections in the fifth, sixth and seventh rounds. It’s a draft class with a lot of similarities. For the first time in team history, they selected all Europeans. All four draft players hail from different European countries, and they are all forwards. In the fifth round, the Penguins selected 20-year old Czech center Dominik Simon. Simon ... END_OF_DOCUMENT_TOKEN_TO_BE_REPLACED