Duquesne will open the 2016-17 Atlantic 10 season at Fordham on Dec. 30 - marking the Dukes earliest conference start since 1993-94 - it was announced by the conference office as part of the league schedule released today. Eight of DU’s 18 conference games will be televised including home games vs. VCU (Jan. 4 on ASN), Dayton (Jan. 14 at CONSOL Energy Center on CBSSN), Rhode Island (Jan. 21 on NBCSN), St. Bonaventure (Feb. 1 on ASN) and George Washington (Feb. 19 on NBCSN). Duquesne’s ... END_OF_DOCUMENT_TOKEN_TO_BE_REPLACED 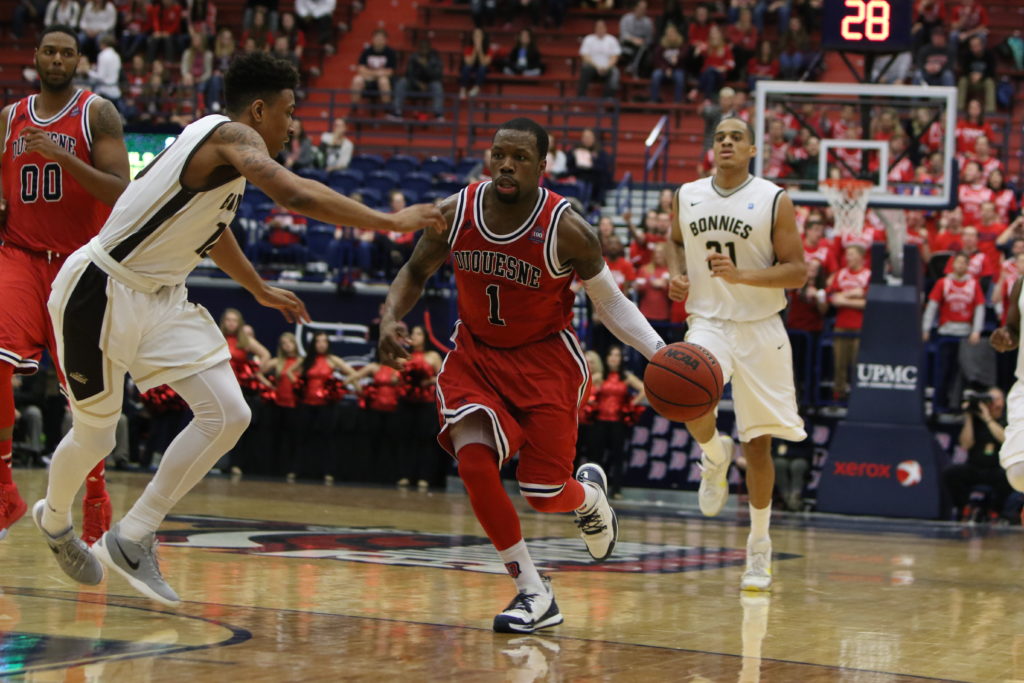 Former Duquesne guard Derrick Colter has signed a contract to play professional basketball in France. Colter, who finished his career with over 1,500 points and 500 assists, will play for Roen Metropole Basket of the Ligue Natiuonale de Basket Pro B League, the second-highest league in France. Colter joins former Duquesne teammates Micah Mason, who signed to play professionally in Belgium two weeks ago, and Ovie Soko, who signed a contract to play in Italy in 2014, abroad. Colter is the ... END_OF_DOCUMENT_TOKEN_TO_BE_REPLACED 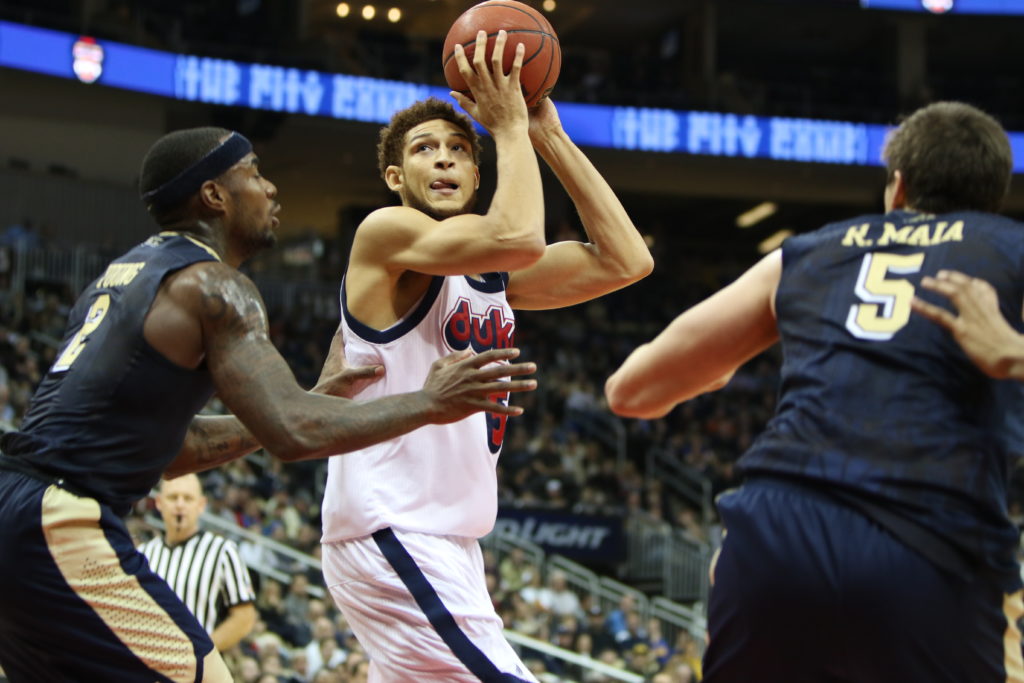 Former Duquesne forward TySean Powell announced his decision to transfer to the University of the Pacific via Twitter today. Powell, a 6’8 junior, left the Duquesne program in February, saying in his Twitter message, “I would like to thank the Duquesne Basketball Program for allowing me to pursue my dream of playing college basketball, but at this stage in my career I feel it is best to move on to different opportunities that fit me as a player and the family oriented person that I ... END_OF_DOCUMENT_TOKEN_TO_BE_REPLACED

In a season that has been full of history making, the Duquesne women's basketball team made even more history Saturday afternoon. Behind a career-high 25 points from Deva'Nyar Workman, the ninth-seeded Duquesne women easily dismantled the eigth-seeded Seton Hall Pirates 97-76 to score their first ever NCAA tournament win in program history. This win comes five days after the Dukes secured their first ever NCAA tournament berth. It was evident early in Saturday's first-round contest that ... END_OF_DOCUMENT_TOKEN_TO_BE_REPLACED

A historic season for the Duquesne’s women’s basketball team just got more historic Monday night. The Dukes earned their first ever NCAA tournament bid by receiving the ninth seed in the Bridgeport regional, and will take on the Seton Hall Pirates. This bid is a well-deserved award for a team that made the University and the City of Pittsburgh proud all season. This is the first time since 1977 that any Duquesne basketball team, men or women, has made the NCAA tournament.  The Dukes ... END_OF_DOCUMENT_TOKEN_TO_BE_REPLACED

Duquesne (12-6, 2-3) edged out St. Bonaventure (12-4, 4-1) 95-88 Saturday night at A.J. Palumbo Center, outrebounding the Bonnies in the effort. The Dukes totaled 49 rebounds to the Bonnies’ 34 boards and grabbed 35 defensive rebounds to the Bonnies’ 21. Duquesne took advantage of a 9-2 run with seven minutes to go in the second half before taking control of the game. The Dukes went 15-for-16 in free throws for the remaining five minutes of the game when the Bonnies began fouling to stop ... END_OF_DOCUMENT_TOKEN_TO_BE_REPLACED

Duquesne (10-3) fell to Georgia Tech (10-3) 73-67 tonight at the McCamish Pavilion in Atlanta, struggling offensively in the loss. Duquesne’s senior guard Micah Mason led the Dukes with 17 points, netting 5-of-10 shots from behind the arc. Sophomore forward Eric James, who replaced senior forward Jeremiah Jones in the starting lineup, added 11 points and grabbed 11 rebounds for the Dukes. Jones tore his left ACL in the first half of the Robert Morris contest, ending the team captain’s ... END_OF_DOCUMENT_TOKEN_TO_BE_REPLACED

Duquesne (9-2) hosts Robert Morris (2-9) at 2 p.m. today at Palumbo Center, looking to open 7-0 at home for the first time since the 1979-80 season. The Dukes return to action after an 83-68 home win over South Carolina State on Wednesday. The Colonials snapped a three-game losing streak on a 69-67 home win over Lehigh on Thursday. RMU looks to earn its first road win of the 2015-16 season (0-7). Duquesne aims to disrupt RMU’s current five-game win streak in a series the Dukes lead ... END_OF_DOCUMENT_TOKEN_TO_BE_REPLACED

Pittsburgh (5-1) topped Duquesne (6-2) 96-75 tonight in the 84th City Game, led by Michael Young and James Robinson. Young, a junior forward for the Panthers, scored 20 points and Robinson, a senior guard, added 18. Sophomore forward Eric James led the Dukes and court in scoring a career-high 21 points. Senior guard Derrick Colter contributed 15. Duquesne lost the battle for the boards, with Pitt grabbing 40 rebounds to the Dukes’ 29. “It’s hard to win when they don’t miss and when ... END_OF_DOCUMENT_TOKEN_TO_BE_REPLACED

In the 84th meeting against Pittsburgh (4-1) this evening, Duquesne (6-1) plans to focus on defense and rebounding to outpace the Panthers. “Right now we’re playing really well, and I think that starts on the defensive end,” said Micah Mason, Duquesne senior guard. “Every game that we’ve won so far we’ve got stops. We picked up two big wins in Florida, and it was all about defense. I think this is the most confidence we’ve had going into a Pitt game.” The Panthers, coming off a No. 11 ... END_OF_DOCUMENT_TOKEN_TO_BE_REPLACED