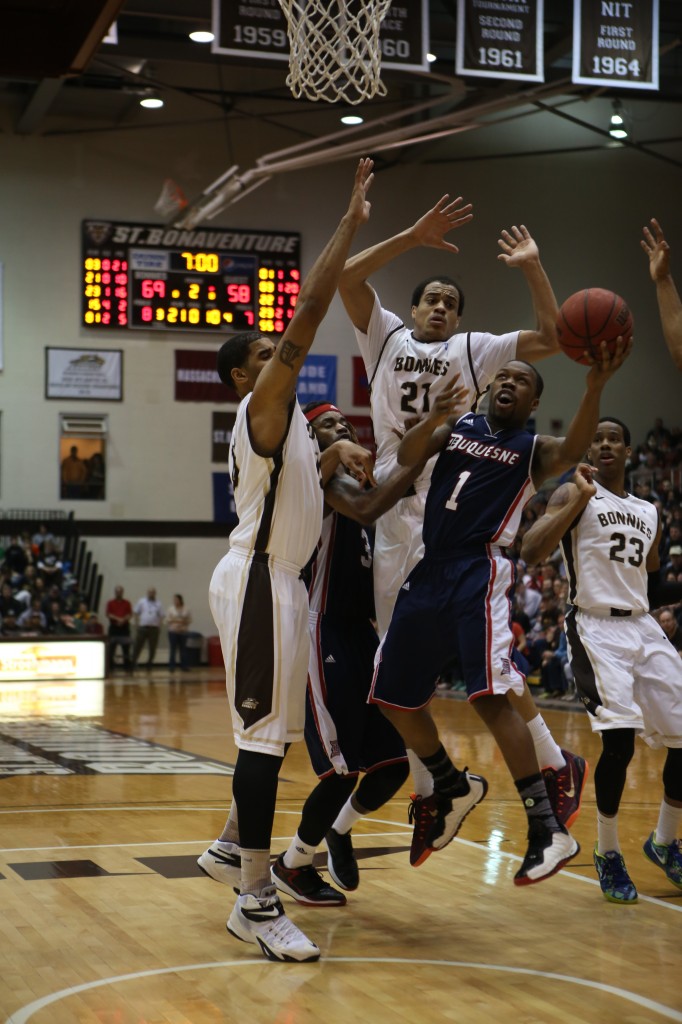 Duquesne (10-17, 5-11) suffered a 92-75 loss to St. Bonaventure (15-12, 8-8) this afternoon at the Reilly Center in Olean, Ny. This is the seventh consecutive home win over Duquesne for the Bonnies. The Dukes led for a mere 0:30 at the start of the game until the Bonnies took over at 19:12 in the first half with a three pointer by senior guard Andell Cumberbatch. Junior guard Marcus Posley led the Bonnies with 29 points, including six 3-pointers. Cumberbatch added 18 points. Leading ... END_OF_DOCUMENT_TOKEN_TO_BE_REPLACED

Something happened at the A.J. Palumbo Center Wednesday night that had not occurred in 48 years: Saint Francis defeated Duquesne 67-52 at the Dukes’ own Pittsburgh locale. Saint Francis hit 10 of their first 15 shots, opening with a 21-8 lead in the Red Flash’s wire-to-wire win. Saint Francis never looked back. Junior guard Derrick Colter led the Dukes with 17 points, while junior guard Jeremiah Jones contributed 10 points and a team-high seven rebounds in the effort. The Red Flash’s ... END_OF_DOCUMENT_TOKEN_TO_BE_REPLACED

It's become one of the better rivalries in Pittsburgh, but it may not be one that you think of right away. On Wednesday evening at the Consol Energy Center, the Pitt Panthers and Duquesne Dukes will square off for 81st time in their annual City Game. While Pitt currently leads the all-time series 49-31, the have dominated the matchup for the past 11 years without losing a contest. While the majority of them have been blowouts, the last contest was a little too close for comfort with the Panthers ... END_OF_DOCUMENT_TOKEN_TO_BE_REPLACED

Pittsburgh—This Wednesday, Duquesne University will take on the University of Pittsburgh in the annual matchup of Pittsburgh’s two Division I basketball teams. The game will be played at Consol Energy Center for the 3rd straight year. The first City Game took place on January 13th, 1932 and has varied in degrees of competiveness through the years. Since 1932, there have been eighty meetings between the two schools. Pittsburgh is leading the all-time series 49-31 and has won the past eleven City ... END_OF_DOCUMENT_TOKEN_TO_BE_REPLACED

Pittsburgh—Call it a home stand, call it a Burgh-stand, call it what you will. But Duquesne will not be leaving the city of Pittsburgh for a game until December 20th when they travel to Louisiana-Lafayette. Two of Duquesne’s six games in this span will take place at the Consol Energy Center and one will be at Robert Morris. The first contest of the Dukes’ six game stand in Pittsburgh took place Saturday afternoon against the Maine Black Bears. It was the first ever meeting between the two ... END_OF_DOCUMENT_TOKEN_TO_BE_REPLACED

Washington— The Duquesne Dukes fell to 0-2 in a hard-fought, physical basketball game Sunday night. Sean Johnson led all scorers with a game-high 21 points, while Georgetown’s D’Vauntes Smith-Riviera finished with 19. Although physical, the Hoyas season opener proved to be a sloppy one. Duquesne finished with 14 turnovers to Georgetown’s 17. The visiting Dukes shot a lousy 4-24 (16.7 percent) from three-point range. Duquesne was able to jump out to a short-lived 8-5 lead in the early ... END_OF_DOCUMENT_TOKEN_TO_BE_REPLACED

The Jim Ferry era opened with a loss Friday night at the SEFCU Arena in Albany, NY. In what Ferry would describe as an ugly basketball game, the Dukes found their freshmen doing a lot of the scoring. Derrick Colter led all scorers with 17 points, while fellow freshman Quevyn Winters came off the bench with 15. Winters also came down with 11 rebounds to complete the double-double. Duquesne came out with two freshmen in the starting lineup, Colter and Jeremiah Jones. When playing on the road ... END_OF_DOCUMENT_TOKEN_TO_BE_REPLACED

Duquesne is just about ready to tip-off its regular season Friday night against Albany, in what is sure to be a pivotal year for Duquesne basketball. Many people have seen the headlines since last season: a new coach, two key players transferring, and only two returning seniors. What will Duquesne basketball look like this year? Let’s first look at the man calling the shots. Coach Jim Ferry is regarded as an offensive guru. In 2011, while at LIU, his offense ranked second in the nation in ... END_OF_DOCUMENT_TOKEN_TO_BE_REPLACED

On April 10, 2012, Jim Ferry was hired as Duquesne’s 16th head coach in the basketball program’s 95-year history. If past evidence tells us anything, it appears athletic director Greg Amodio has hired the right man to do what former coach Ron Everhart failed to do: make the NCAA tournament. Duquesne has not made an appearance at the “big dance” since 1977. According to ESPN, Amodio described the new head coach as “a winner at every level.” Ferry’s success in his former head coaching role at ... END_OF_DOCUMENT_TOKEN_TO_BE_REPLACED

NORFOLK, VA. - Duquesne went toe-to-toe with one of the top teams in the Football Championship Subdivision for three quarters, before falling 57-23 at No. 6/8 (Coaches/Sports Network) Old Dominion before a sellout crowd of 19,818 at S.B. Ballard Stadium. The Dukes, who led 20-10 at the half, couldn’t contain the Monarchs who scored 47 second-half points to up their all-time home record to 17-5. Sophomore Taylor Heinicke completed 41-of-63 passes for 492 yards and four scores to lead the ... END_OF_DOCUMENT_TOKEN_TO_BE_REPLACED