Pittsburgh Penguins (48-25-8) The Pittsburgh Penguins are coming off of a magnificent win against the Metropolitan Division winners, Washington Capitals. Sidney Crosby struck for a goal in overtime to give Pittsburgh its 48th win of the season. The Penguins are looking to finish the season off strongly against the rivaled Flyers. If Pittsburgh is able to win today, they will sweep all four games against Philadelphia. Marc-Andre Fleury has not been ruled out of today's game. Coach Mike ... END_OF_DOCUMENT_TOKEN_TO_BE_REPLACED

Flyers forward Zac Rinaldo was suspended eight games by the NHL’s department of player safety for this hit on Penguins defenseman Kris Letang on last Tuesday night. [youtube width="560" height="315" link="http://youtu.be/z7nr2UlQZxI"] The hit, which the league characterized as charging and boarding, took place at 15:36 of the first period. Letang left the game and did not return. He also missed the Penguins’ next game, which was last Wednesday night against Chicago. On-ice officials ... END_OF_DOCUMENT_TOKEN_TO_BE_REPLACED 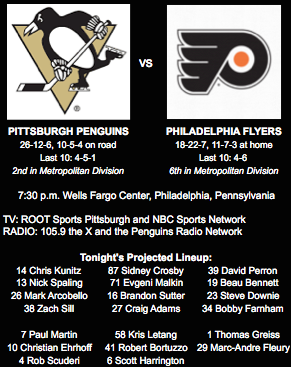 It’s only a five-hour trip down Interstate 76, but two teams –and their fanbases- couldn’t be farther apart that the Pittsburgh Penguins and the Philadelphia Flyers. First-year Penguins head coach Mike Johnston has stressed puck possession and discipline with his squad. Although the Penguins are in the midst of a disappointing stretch (2-3-1 in their last six games), the results have been more positive than negative for the Penguins this season. They sit comfortable within playoff position in ... END_OF_DOCUMENT_TOKEN_TO_BE_REPLACED