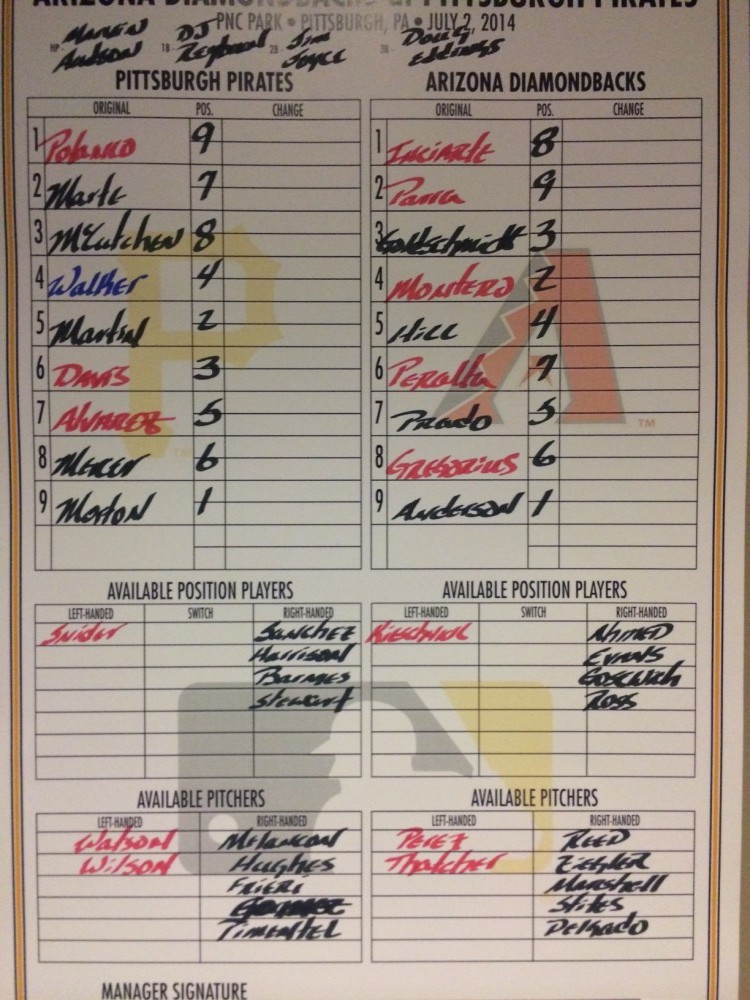 Good afternoon from PNC Park where the Pirates (43-40) look to build off of last night's improbable come-from-behind victory against the Mets in the second game of the three-game set. Charlie Morton (4-9, 3.41 ERA) will take on Chase Anderson (5-3, 3.63 ERA). Francisco Liriano threw a sim game (1 IP behind L-Screen, 3 IP w/o screen) prior to batting practice today. "I saw three of the innings that he pitched," said Clint Hurdle. "He's thrown all of his pitches. Working out of the windup ... END_OF_DOCUMENT_TOKEN_TO_BE_REPLACED

Good afternoon from PNC Park where today the Pirates (39-39) begin a 10-game homestand against the New York Mets (36-42). Vance Worley (1-0, 1.98 ERA) will oppose Daisuke Matsuzaka (3-1, 2.68 ERA).  Injury Update Starling Marte: "The neck, the head aren't really an issue," said manager Clint Hurdle. "He's being treated for that right-middle finger. He's gone and tried to hit, so we're going to find out what the availability he'll have tonight. It's better than it was yesterday, but we're going ... END_OF_DOCUMENT_TOKEN_TO_BE_REPLACED 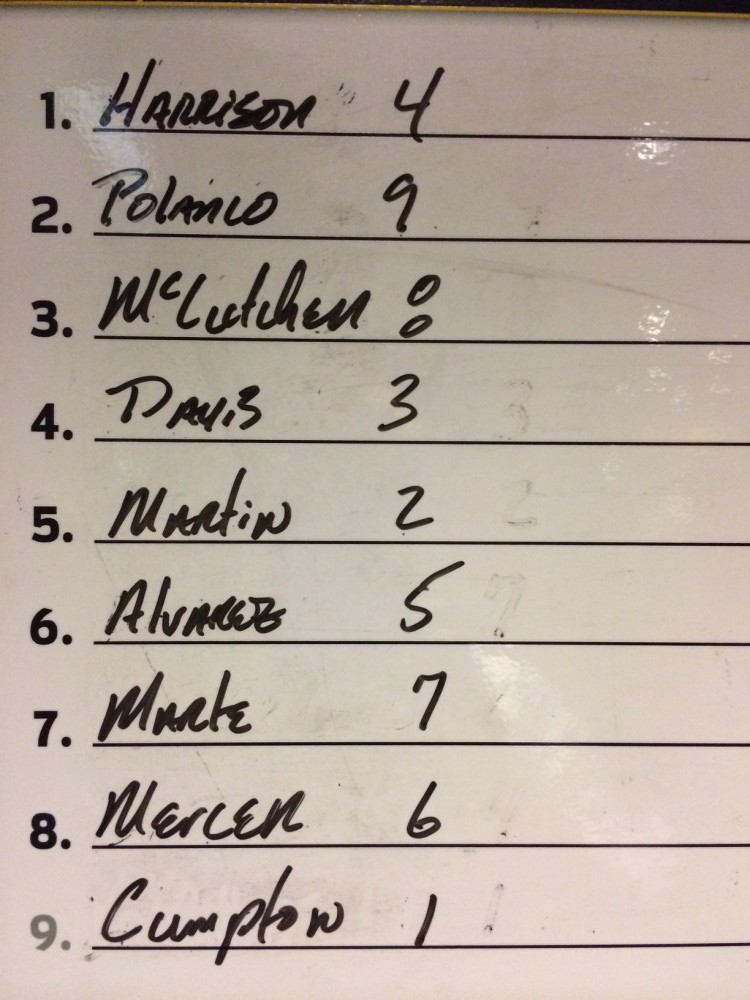 Good afternoon from PNC Park where today the Pirates (30-34) look to bounce back from last night's 7-3 loss to the Cubs (26-36) in the third game of a four-game set. Brandon Cumpton (1-2, 6.51 ERA) will take the hill for the Bucs against Jason Hammel (6-3, 2.53 ERA).  DL Update Francisco Liriano has been placed on the 15-Day DL with a left oblique strain. Stolmy Pimentel has been activated from the DL to take his place on the roster. Hurdle on Cole's status: "He threw out to 90 ft [yesterday] ... END_OF_DOCUMENT_TOKEN_TO_BE_REPLACED

Francisco Liriano left the game in the third inning due to "left side discomfort" and the game seemed to fall out of hand after that as the Cubs defeated the Pirates 7-3 on Gregory Polanco's debut game in the black and gold. Liriano didn't get out of the gates the way he wanted as he allowed a one out single to Junior Lake and then left a changeup up to Anthony Rizzo that he sent into the Clemente seats. After that, Liriano settled down retiring seven of eight batters before leaving the ... END_OF_DOCUMENT_TOKEN_TO_BE_REPLACED

Francisco Liriano dug the Pirates an early hole that they couldn't get out of as the Nationals (25-25) avoided the four-game sweep with a 5-2 victory over the Pirates (22-27) on Sunday afternoon. Liriano's struggles began right away as he allowed a lead off double to Denard Span and a walk to Anthony Rendon. Liriano retired the next two batters, but allowed Span to score on a wild pitch and Rendon on a RBI single by Ian Desmond. Liriano settled down through innings 2-4 before getting into ... END_OF_DOCUMENT_TOKEN_TO_BE_REPLACED

Francisco Liriano and the Pirates (18-26) were cruising along with a 1-0 lead until Chris Davis --three home runs on the night -- led an Orioles (23-20) offensive attack to a 9-2 beating of the Bucs on Tuesday night. Liriano had allowed two hits through the first three innings while striking out three before losing control of his pitches in the fourth. Chris Davis started the scoring by reaching via an infield single and scoring on a J.J. Hardy RBI single. Nelson Cruz would also score in the ... END_OF_DOCUMENT_TOKEN_TO_BE_REPLACED

The Pittsburgh Pirates (17-22) evened up their series against the Milwaukee Brewers tonight, winning 4-1 behind a solid performance from SP Francisco Liriano. Bryan Morris, Tony Watson, and Mark Melancon finished off the final three innings, with Melancon racking up save number five since taking over for injured closer Jason Grilli. The Brewers (25-15) were unable to get anything going against Liriano until scoring the tying run on a Jeff Bianchi sacrifice fly in the bottom of the fifth ... END_OF_DOCUMENT_TOKEN_TO_BE_REPLACED

Neil Walker sent a 2-2 pitch by Carlos Martinez into the Clemente seats to help the Pirates (15-20) get past the Cardinals (18-18) 6-4 in the first game of a weekend three-game set. Walker finished off the three-run rally started by a Jordy Mercer single -- who finished 3-for-4 on the night with a double and run scored -- and a Gaby Sanchez pinch-hit single. After Jose Tabata bunted the two into scoring position, Walker provided the big blow a pitch after he nearly connected, but hit foul. "It ... END_OF_DOCUMENT_TOKEN_TO_BE_REPLACED

The Pirates pushed across six runs against the Blue Jays bullpen in the seventh and eighth innings en route to an 8-6 win over Toronto on Saturday night. Clint Barmes started the seventh off with a double forcing Jays pitcher R.A. Dickey from the game. The knuckleballer had limited the Pirate bats to only three hits to that point. The Bucco bats then got to work against the Jays bullpen collecting four hits (two doubles) and one walk culminating in Jordy Mercer's pinch-hit 2 RBI double to tie ... END_OF_DOCUMENT_TOKEN_TO_BE_REPLACED

The St. Louis Cardinals jumped on Francisco Liriano early for three runs in the first and the Pirate offense couldn't repeat their 12-run barrage from a night ago in a 6-1 loss on Saturday night. Liriano started off his night allowing three straight hits --including a lead-off single by Matt Carpenter, who was the fifth player in-a-row to lead-off the game with a hit -- and five of the first seven Cardinals to reach base in route to a Pirates 3-0 hole after a half inning. "I tried to use ... END_OF_DOCUMENT_TOKEN_TO_BE_REPLACED