Over the weekend, the Penn State men's wrestling and men's ice hockey teams won and showcased some big-time hardware. On the ice, the Nittany Lions went to double overtime two nights in a row to win the first Big Ten Ice Hockey championship in program history and advance to the NCAA Frozen Four. The wrestlers, on the other hand, took home their sixth national title in seven years. While men's hockey coach Guy Gadowsky and his team will continue their pursuit of national glory this Thursday ... END_OF_DOCUMENT_TOKEN_TO_BE_REPLACED

The Penn State men’s ice hockey team will have a new leadership structure in 2015-16, as head coach Guy Gadowsky announced new captains and alternates for the squad on Thursday. Senior center David Glen will wear the “C” for the Nittany Lions this season, with senior defenseman Luke Juha and junior defenseman David Thompson, serving as alternates. “Our staff supports a hundred percent, the team’s choice for captains,” Gadowsky said in a press release. “All three exhibit a high level of ... END_OF_DOCUMENT_TOKEN_TO_BE_REPLACED

The Penn State Nittany Lions mens’ hockey team has announced the addition of three players for the upcoming season. Chris Funkey, Derian Hamilton, and Vince Pedrie will join the Lions in the 2015-2016 campaign. With the commitments, Penn State has gained two defensemen and a goalie. Chris Funkey G || 5-10 || 175 || March 16, 1994 Hometown: Orland Park, Illinois Last Team: New Jersey Hitmen (USPHL) Funkey was a three-year starter for the Hitmen and played in 31 games in the ... END_OF_DOCUMENT_TOKEN_TO_BE_REPLACED 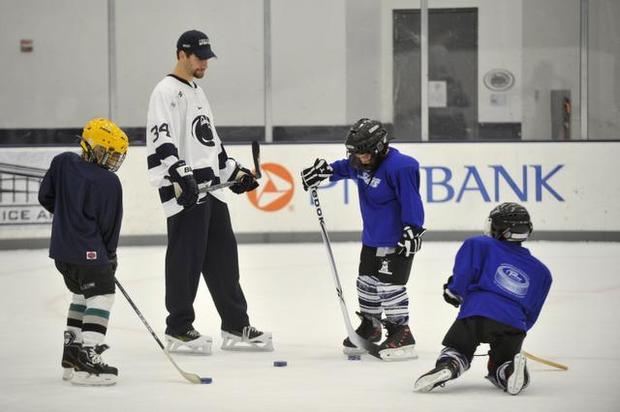 The lockers have been cleared, the ice has been removed and the equipment has been stored, but the impact of the 2014-2015 season for the Penn State men’s hockey team will resonate in the coming years. In terms of the economic impact for the university, upswing in recruiting for the team, and support of the surrounding community, men’s hockey is one of the best performing athletic programs for Penn State right now. They Just Can’t Get Enough: Just as a film’s success is partially defined ... END_OF_DOCUMENT_TOKEN_TO_BE_REPLACED

Penn State head coach Guy Gadowsky was voted Big Ten Coach of the Year on Monday afternoon, giving the team its first major conference award. Junior forward Casey Bailey was named to the All-Big Ten First Team, another first for the program. Scott Conway and Max Gardiner also received nods from the conference, and six other players were given Honorable Mentions. Gadowsky is no stranger to Coach of the Year awards; in the 2001-2002 season, he received the title from the Central Collegiate ... END_OF_DOCUMENT_TOKEN_TO_BE_REPLACED