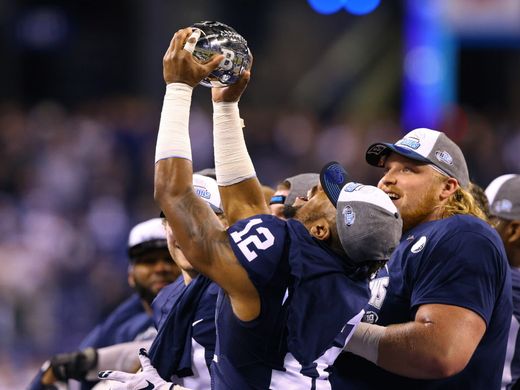 This program wasn't supposed to be here. This program was supposed to live in mediocrity as a result of the fallout from the Jerry Sandusky scandal and the sanctions that followed — or so almost everyone thought. But this program, the Penn State Nittany Lions, is a champion once again, overcoming insurmountable odds to become the 2016 Big Ten Champions after they beat the Wisconsin Badgers 38-31 Saturday evening. How they got to that point is incredibly impressive — and it all began and ... END_OF_DOCUMENT_TOKEN_TO_BE_REPLACED

Hidden deep in a release yesterday highlighting promotions for the upcoming Penn State football season was a tidbit of information announcing the university's plans to commemorate the 50th anniversary of the late Joe Paterno's first game as head coach of the Nittany Lions. The former head coach, fired as a result of fallout from the arrest of former assistant coach Jerry Sandusky, passed away in 2012 after a lengthy battle with cancer. The commemoration will be the first time the ... END_OF_DOCUMENT_TOKEN_TO_BE_REPLACED

Former Penn State head coach Joe Paterno was informed that assistant coach Jerry Sandusky was molesting children as early as 1976, according to a report from PennLive.com. The report found, in a court order involving a related insurance case, a line that read: "in 1976, a child allegedly reported to PSU's head coach Joseph Paterno that he (the child) was sexually molested by Sandusky." PennLive.com's report also notes the court order mentioned that, in 1987 and 1988, assistant coaches ... END_OF_DOCUMENT_TOKEN_TO_BE_REPLACED

The legendary career of Joe Paterno will be memorialized in the Pennsylvania Hall of Fame in October. Deified, disgraced, and then honored once again, Paterno’s fall from grace following the 2012 Sandusky child sex abuse scandal ended with the termination of his employment at Penn State and his eventual death from lung cancer complications. His career, which spanned 62 years with the Nittany Lions, featured 409 wins (112 of which were recently restored after the NCAA sanctions stripped ... END_OF_DOCUMENT_TOKEN_TO_BE_REPLACED

The NCAA proposed a settlement on Friday that would restore the Penn State football team’s wins that were vacated after the Sandusky child molestation scandal. Included in the deal is a new $60 million fine that would help provide for educational programs and reporting mandates for suspected child abuse in Pennsylvania. Per the NCAA, the proposed agreement includes the following: • Penn State agrees to commit a total of $60 million to activities and programs for the prevention of child ... END_OF_DOCUMENT_TOKEN_TO_BE_REPLACED

Jerry Sandusky is a name that all of us will remember forever but wish we wouldn't. It is certainly a name that Sue Paterno will have engrained in her life forever. On Friday we released a copy of the letter that Sue Paterno, the wife of Penn State legend Joe Paterno, released telling the public that she was openly challenging the Freeh report. The Freeh report was a report of the findings of those who were allegedly involved with the Sandusky scandal. Today, on ESPN Outside the Lines, her ... END_OF_DOCUMENT_TOKEN_TO_BE_REPLACED

When loyalties are tested, integrity is questioned and often forgotten. This was most certainly the case with former Penn State University head football coach, Joe Paterno. People will remember him one of two ways. They can remember him for his brilliant football mind and countless contributions to Penn State. They can also remember him for the things he didn't necessarily do. It has been a year since he passed away and a lot of people will be remembering him in one way or another. The ... END_OF_DOCUMENT_TOKEN_TO_BE_REPLACED

The 2012 Penn State University football team may reside as one of the most beloved and talked about Penn State football teams ever. They didn't go undefeated or win a Big Ten Conference Championship. However, the obstacles that this team overcome being in the shadows of the Jerry Sandusky scandal after one of the most trying years that any Division I school has gone through, earned them a spot in the ring of honor where every undefeated and Big Ten championship team that Penn State has had is ... END_OF_DOCUMENT_TOKEN_TO_BE_REPLACED