After years of searching for a goal scoring winger for Sidney Crosby, the Penguins may have found their man. The Pens sent Kaperi Kapanen, Scott Harrington, Nick Spaling, and the Penguins 2016 first and third-round picks to the Leafs for right-winger Phil Kessel, defensemen Tim Erixon, forward Tyler Biggs and the a 2016 second-round selection. Additionally, Toronto retained 15 percent of Kessel's remaining salary. In other words, the Penguins acquired one of the better goal scorers in the NHL ... END_OF_DOCUMENT_TOKEN_TO_BE_REPLACED 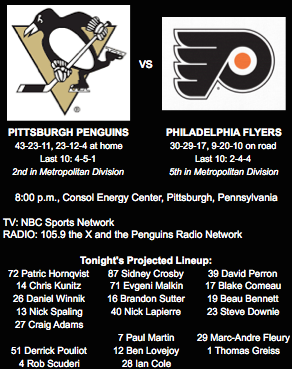 The Pittsburgh Penguins first-round draft pick and top forward prospect Kasperi Kapanen has ended his season and his native Finland and will soon join the Penguins’ top farm club in Wilkes-Barre/Scranton. Kapanen, 18, scored 11 goals and recorded 10 assists in 41 games with KalPa of the Finnish Liiga. It was a disappointing season for the youngster, who played well for stretches but failed to dominate the league as hoped. He also added one goal in five games for Team Finland in the under-20 ... END_OF_DOCUMENT_TOKEN_TO_BE_REPLACED

With the Penguins playing with just 17 skaters instead of the usual 18 last night in Carolina, general manager Jim Rutherford has been given one cap-free call up by the NHL to alleviate his roster emergency. Hey may not need to use it, as center Evgeni Malkin is close to returning to action (he was a full participant in practice today). Still, the possibility exists that Rutherford may look to improve the play of his forward group with some help from down on the farm. Some in the ... END_OF_DOCUMENT_TOKEN_TO_BE_REPLACED

The Pittsburgh Penguins’ 2014 first-round pick Kasperi Kapanen remains on the active roster despite the fact that he has returned home to his native Finland. General Manager Jim Rutherford announced that five players were cut on Tuesday afternoon. Defenseman Scott Harrington was assigned to Wilkes-Barre/Scranton of the American Hockey League. Forwards Zach Sill and Andrew Ebbett and defenseman Taylor Chorney were assigned to Wheeling of the ECHL. Forward Oskar Sundqvist was returned to ... END_OF_DOCUMENT_TOKEN_TO_BE_REPLACED

Pittsburgh Penguins’ rookie forward Kasperi Kapanen will miss this weekend’s rookie tournament. The 18-year-old Finnish winger was the Penguins first-round pick in this year’s NHL entry draft. Kapanen injured his hand this August in a game while playing for Team Finland’s U20 World Junior squad. The Penguins anticipate that he will be ready to play at the start of the team’s training camp, which begins next week. It is unknown what effect, if any, this injury will have on his chance of making ... END_OF_DOCUMENT_TOKEN_TO_BE_REPLACED

The Pittsburgh Penguins faced an interesting paradox this week, as they welcomed their top prospects to Consol Energy Center for their annual development camp. On one hand, they are in the midst of a transition of power in hockey operations, with the Jim Rutherford/Mike Johnston axis looking to put its own stamp on the organization. On the other hand, assistant general managers Tom Fitzgerald and Bill Guerin sought to maintain some continuity for the youngsters they've been working with ... END_OF_DOCUMENT_TOKEN_TO_BE_REPLACED

The Pittsburgh Penguins made their first selection under new General Manager Jim Rutherford tonight at the 2014 NHL Entry Draft held tonight at the Wells Fargo Center in Philadelphia. After speculation Rutherford might trade the pick, those rumors were laid to rest with the selection of Kasperi Kapanen of Kalpa of the Finnish Elite League. Kapanen, the son of former NHL forward Sami Kapanen is a skilled right wing prospect who struggled with injury this past season, but at 17, is considered ... END_OF_DOCUMENT_TOKEN_TO_BE_REPLACED