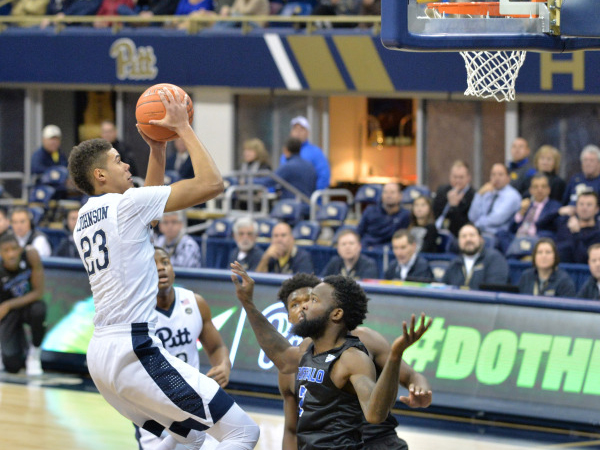 The Pittsburgh Panthers men’s basketball team got a much-needed win over the University of Buffalo Bulls on Wednesday night, especially after Pitt failed to defeat the Duquesne Dukes in the “City Game.” The Panthers beat the Bulls, 84-79. But the game shouldn't have been nearly as close as it was at the end. Pitt once held a 26-point lead, and the team was up 30-6 at one point. At another point, the Panthers were up 47-21 before the Bulls outscored the Panthers 58-37 over the rest of the ... END_OF_DOCUMENT_TOKEN_TO_BE_REPLACED

Since being named the new Pitt head basketball coach, the top priority for Kevin Stallings has been to assemble his coaching staff. With the announcement last week that long time Pitt assistant Brandin Knight would not be returning, Stallings quickly moved on to complete his staff. Friday, Stallings officially announced the additions of Tom Richardson and Jeremy Ballard to his coaching staff for the 2016-17 season Friday afternoon. In addition, Stallings will also bring on Dan Cage as ... END_OF_DOCUMENT_TOKEN_TO_BE_REPLACED

Pitt fans have had a good 24 hours now to let the hiring of Kevin Stallings sink in and the opinion really hasn't changed as mostly the entire fan base views this as a terrible hire from athletic director Scott Barnes. But what exactly does Stallings bring to the table as a coach? While personally I am not thrilled with the hire, I'm not dead set against it either. Here's a few areas where Stallings will improve the Panthers in quick time. The biggest improvement will be at ... END_OF_DOCUMENT_TOKEN_TO_BE_REPLACED

It didn't take long for new Pitt basketball coach Kevin Stallings to get to work. It also didn't take long for the first incoming player to jump ship. Stallings, who won't be introduced until Monday afternoon, has already offered his first scholarship. Stallings already has reached out to four-star 2017 point guard Aaron Thompson and offered him a scholarship. Thompson, who is a current teammate of 2016 Pitt signee, forward Corey Manigault, is ranked as a four-star prospect by Scout and ... END_OF_DOCUMENT_TOKEN_TO_BE_REPLACED

According to ESPN, Stallings confirmed that he informed his players that he is taking the Pitt job. Stallings led Vanderbilt into the NCAA Tournament, but was defeated by Wichita State in the First Four. There was speculation that Vanderbilt was expected to sever ties with Stallings, but Stallings found another job before that could happen. Barnes reached out to several candidates, but was spurned by the likes of Sean Miller, Archie Miller and former Pitt head coach Ben Howland. Other ... END_OF_DOCUMENT_TOKEN_TO_BE_REPLACED