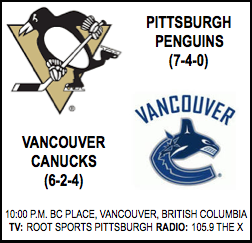 The Penguins will start the Western Canadian portion of their four-game road trip tonight when they visit the Vancouver Canucks at Rogers Arena tonight at 10 p.m. The Pens have already been on the road for four days. They left Pittsburgh on Friday before their 4-0 victory over the Toronto Maple Leafs on Saturday. Since then, the Penguins have had a rare three days off on the road. KUNITZ QUESTIONABLE Left-winger Chris Kunitz will be a game-time decision for tonight’s game. He skated ... END_OF_DOCUMENT_TOKEN_TO_BE_REPLACED

Sidney Crosby skated with newly acquired right winger Phil Kessel at the Pittsburgh Penguins training camp over the weekend, forming a combination expected to dominate the NHL in the upcoming season, but another roster fixture paired with new member of the team stuck out during the drills at the UPMC Lemieux Sports Complex in Cranberry Township. Beau Bennett, a fragile, underperforming forward, gelled with Nick Bonino, the probable third line center acquired via trade in the offseason. Bennett ... END_OF_DOCUMENT_TOKEN_TO_BE_REPLACED

Pittsburgh Penguins general manager Jim Rutherford faced a lot of criticism in his first year on the job. Many commenters (including this columnist) felt that Rutherford did not adequately manage his assets or the salary cap in order to put his team in the best possible position come playoff time. It was an easy criticism to make. The Penguins had so little salary cap space that they were forced to play with five defensemen for a long stretch at the end of the season, while minimal ... END_OF_DOCUMENT_TOKEN_TO_BE_REPLACED

The Pittsburgh Penguins have signed free-agent center Eric Fehr to a three-year contract worth $2 million annually. To make room under the salary cap for Fehr, the Penguins traded center Brandon Sutter, along with a 2016 third-round draft choice, to the Vancouver Canucks for Nick Bonino, Adam Clendening and a 2016 second-round pick. Fehr, 29, had spent nine of is 10 NHL seasons with the Washington Capitals, who drafted him in the first round in 2003. In 75 games with the Caps in 2014-15, Fehr ... END_OF_DOCUMENT_TOKEN_TO_BE_REPLACED