The Pittsburgh Riverhounds look to add some offense with the recent addition of Guinean forward Amara Soumah for the remainder of the season, as the two sides agreed to terms. The 24-year-old Soumah joins the Hounds after playing the past two years at California State University, Fullerton, where he scored eight goals in 38 games. "Amara has very good speed and can attack from a wide position or as a central striker," said Riverhounds coach Mark Steffens in a team-issued press release. "He ... END_OF_DOCUMENT_TOKEN_TO_BE_REPLACED

On Saturday night, the Pittsburgh Riverhounds faced St. Louis FC in a packed and loud St. Louis Soccer Park. This match was the first home game for St. Louis FC, who are a recent expansion team in the United Soccer League. The game would eventually end in a tie of 1-1 in a fast-paced game. The first half was filled with scoring chances and good passes; however, neither team could consistently keep strong offensive possessions. Even though there was a lack of constant possession by both teams, ... END_OF_DOCUMENT_TOKEN_TO_BE_REPLACED 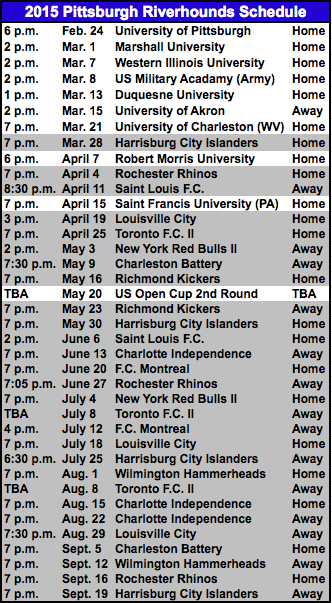