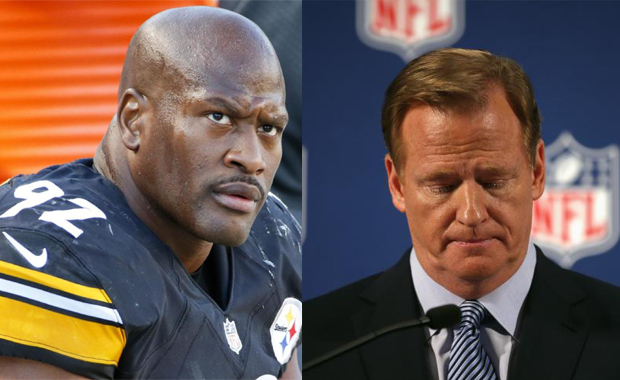 On Thursday, the long-awaited conversation between James Harrison and the NFL regarding PED allegations made in an Al Jazeera America report finally happened. The meeting lasted about 45 minutes, at the Steelers’ training facility. Harrison — and Green Bay Packers Clay Matthews and Julius Peppers, also named in the report — have claimed the allegations were made up. Another person named, Peyton Manning, has been cleared by the NFL. The man who made the accusations, Charlie Sly, has recanted ... END_OF_DOCUMENT_TOKEN_TO_BE_REPLACED

On the field, Pittsburgh Steelers linebacker James Harrison is known for taking no prisoners. Apparently, off the field, he’s the same way. The NFL sent letters to three active NFL players linked to PEDs in an Al-Jazeera America documentary, and, as one of the players named, Harrison fired back. In an Instagram post, Harrison wrote that he’d speak to the NFL about the PED allegations — on a couple of conditions. @NFL I look forward to speaking with you. Goodnight A photo posted by ... END_OF_DOCUMENT_TOKEN_TO_BE_REPLACED

If Pittsburgh Steelers running back Le’Veon Bell was expecting to find out before training camp if his initial three-game suspension for marijuana use and DUI would be reduced before training camp begins, he better not hold his breath. NFL Commissioner Roger Goodell apparently doesn’t have any idea of when Bell’s appeal will be heard. Goodell, speaking in Washington County on Tuesday, said he didn't know the timetable for Bell's appeal. “That appeal is not heard by me, I would have to ... END_OF_DOCUMENT_TOKEN_TO_BE_REPLACED

New England Patriots quarterback Tom Brady will be suspended for four games for his role in the Patriots playing with underinflated footballs last season. In addition, the Patriots organization will forfeit their first-round draft pick in the 2016, their fourth-round draft pick in 2017 and have been find one million dollars. The Patriots have also indefinitely suspended employees John Jastremski and James McNally without pay. Brady will be allowed to participate in off-season and pre-season ... END_OF_DOCUMENT_TOKEN_TO_BE_REPLACED

After months of speculation on how many games Steelers All-Pro running back Le'Veon Bell would be suspended after his DUI arrest last August, the news broke earlier this morning that <a href="http://www.pittsburghsportingnews.com/leveon-bell-suspended-three-games/21435">Bell would miss the first three games of the 2015 season</a>. Though not exactly shocking news, it's a blow to a team that will have to start the season without arguably the best running back in the NFL today. When ... END_OF_DOCUMENT_TOKEN_TO_BE_REPLACED

Don't blame Reggie Nelson for the injury to Le'Veon Bell. Though it would be easy to do, and when you look at the low hit on arguably the best running back in the NFL, it gets even easier. After all, the third quarter hit to Bell's knee by the Bengals safety left Bell limping off the field with a hyperextension, and the injury has Bell's status for the Steelers playoff contest against the Baltimore Ravens very much in doubt. Beyond the fact that Bell has been dominant in 2014, and is even ... END_OF_DOCUMENT_TOKEN_TO_BE_REPLACED

Somewhere along the line, it almost became commonplace for football players, whether in high school, college or the NFL, to commit violent crimes against women. NFL commissioner Roger Goodell had the opportunity on Thursday to send a major message to the players wearing “The Shield” on Thursday and instead acted like a coward similar to Ray Rice acting like a coward when he beat his then fiancée unconscious and was caught on film dragging her body out of an elevator by the feet. By Goodell ... END_OF_DOCUMENT_TOKEN_TO_BE_REPLACED

Once upon a time, in a land far, far away, there lived athletes like Earl Campbell and Jerome Bettis. These men were the definition of smash mouth football. They were known throughout the league for their bone-crushing hits on defenders who stood between them and a first down or the endzone. When hard hitting defenses dug into the trenches looking for a stop, these backs fought back by lowering their shoulders and bulldozing a path. The NFL, under commissioner Roger Goodell, has recently ... END_OF_DOCUMENT_TOKEN_TO_BE_REPLACED

With Valentine's Day now upon us, everyone wants to talk about love. The Pittsburgh Steeler's fan base isn't one that's known for its love and affection of other team's players. With that in mind, let's take a look at some of the players that Steelers fans just love to hate. Tom Brady - There's just something about Tom Brady that drives Steeler Nation wild. He's always played pretty outstanding against the Steelers for the most part. He has an arrogance about him that most opposing team's ... END_OF_DOCUMENT_TOKEN_TO_BE_REPLACED