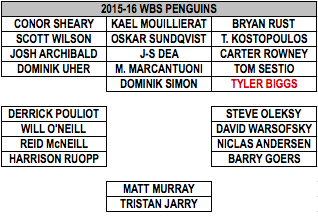 The Wilkes-Barre/Scranton Penguins kick off the 2015–16 season tonight with a new coaching staff and some new players expected to impact the lineup and continue to develop into Pittsburgh Penguins. Several veteran fringe NHL players to give the big club insurance. Kael Mouillierat led the Bridgeport Sound Tigers last season with 24 goals and managed one goal and one assist in six games with the New York Islanders. Kevin Porter comes with 206 games of NHL experience, but none since ... END_OF_DOCUMENT_TOKEN_TO_BE_REPLACED

Don’t look now, but the Wilkes-Barre/Scranton Penguins have turned into one of hockey’s greatest coaching factories. With John Hynes being announced as the New Jersey Devils head coach today, five former WBS coaches now man benches in the NHL. Michel Therrien (Montreal Canadiens), Mike Yeo (Minnesota Wild), Todd Richards (Columbus Blue Jackets) and Dan Bylsma (Buffalo Sabres) are all head coaches while Todd Reirden (Washington Capitals) is an NHL assistant and was also rumored to be in the ... END_OF_DOCUMENT_TOKEN_TO_BE_REPLACED

In Ray Shero’s tenure as the general manager of the Pittsburgh Penguins, no fewer than four men came out the Penguins organization to become NHL head coaches, and it looks like that trend may continue. Three of them – Michel Therrien in Montreal, Mike Yeo in Minnesota and Todd Richardsa in Columbus – are currently employed in the NHL, while Dan Bylsma is widely expected to be offered a job this offseason. Some have even speculated that Bylsma would be a good fit to re-join Shero in New ... END_OF_DOCUMENT_TOKEN_TO_BE_REPLACED

With the Penguins playing with just 17 skaters instead of the usual 18 last night in Carolina, general manager Jim Rutherford has been given one cap-free call up by the NHL to alleviate his roster emergency. Hey may not need to use it, as center Evgeni Malkin is close to returning to action (he was a full participant in practice today). Still, the possibility exists that Rutherford may look to improve the play of his forward group with some help from down on the farm. Some in the ... END_OF_DOCUMENT_TOKEN_TO_BE_REPLACED