Good morning, Pittsburgh. Here's your day in sports for Thursday, September 17, 2015. What's on tap for today: The Penguins will open training camp at their new Cranberry Twp. practice facility. General manager Jim Rutherford and head coach Mike Johnston will speak to the media around 11:00 a.m. The Pirates (87-58) will try to salvage a split of their four-game series with the Chicago Cubs (84-61) this afternoon. Charlie Morton will do the heavy lifting for the Bucs. First pitch is at ... END_OF_DOCUMENT_TOKEN_TO_BE_REPLACED

Good morning, Pittsburgh. Here's your day in sports for Tuesday, September 1, 2015. What's on tap for today: Duquesne will announce the school's new athletic director in a press conference at 10 a.m. The Pirates (79-50) are back in action after a much-needed rest day. They're in Milwaukee for the first game of a nine-game National League Central road trip that will also see them visit the Cardinals and the Reds. If the Pirates want to catch the Cardinals, they'll need to improve ... END_OF_DOCUMENT_TOKEN_TO_BE_REPLACED

The Robert Morris Colonials men’s hockey team has announced that Kody Van Rentergem will be promoted to assistant coach for the 2015-16 season. He will replace departed associate head coach Matt Nicholson, who left to become the head coach of the NAHL’s Amarillo Bulls in July. Former assistant coach Mark Workman was promoted to associated head coach earlier this offseason. Van Rentergem, 28, has spent the past two seasons as the team’s hockey operations coordinator. In that span, the Colonials ... END_OF_DOCUMENT_TOKEN_TO_BE_REPLACED

The Penn State men’s ice hockey team will have a new leadership structure in 2015-16, as head coach Guy Gadowsky announced new captains and alternates for the squad on Thursday. Senior center David Glen will wear the “C” for the Nittany Lions this season, with senior defenseman Luke Juha and junior defenseman David Thompson, serving as alternates. “Our staff supports a hundred percent, the team’s choice for captains,” Gadowsky said in a press release. “All three exhibit a high level of ... END_OF_DOCUMENT_TOKEN_TO_BE_REPLACED

The U.S. Women’s National Team appeared to still be in top form as the world champions routed Costa Rica 8-0 in front of a record-breaking crowd at Heinz Field in their first match back together since their World Cup victory in July. The attendance of 44,028 set a record for a national team friendly and was the 10th-most attended U.S. women’s soccer home match of all time. It was also the largest soccer crowd in Pittsburgh history. “I don’t have to worry about the players getting motivated ... END_OF_DOCUMENT_TOKEN_TO_BE_REPLACED 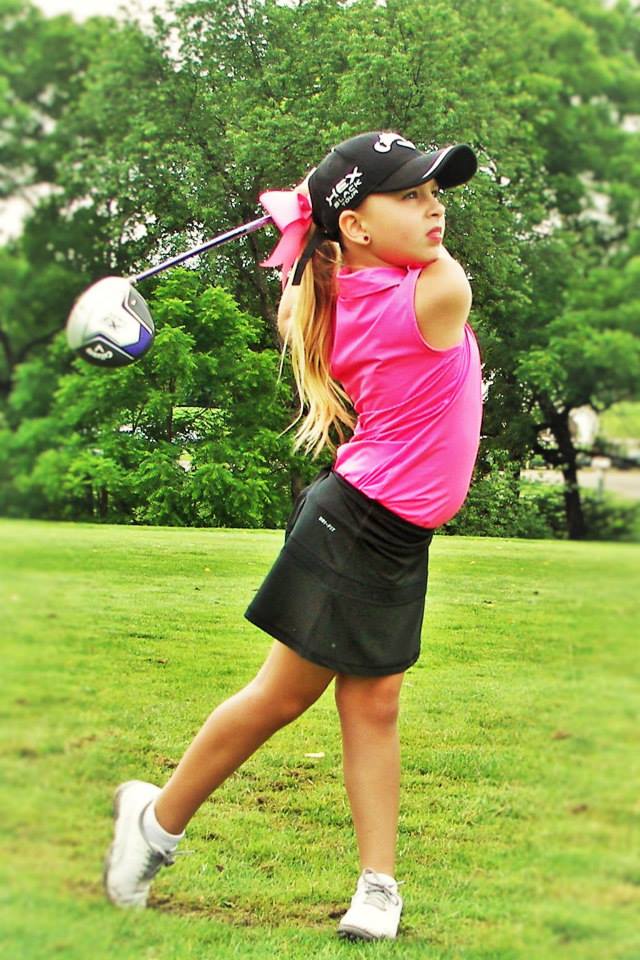 Mya Morgan tied for 38th place in her division at a recent golf world championship in Pinehurst, NC. She is ranked 38th in the world for her age and is a three-time Player of the Year. Mya is seven years old. The Pittsburgh native competed in the U.S. Kids Golf World Championship at Midland Country Club from July 30 through August 1, finishing the tournament with a final score of 26 over par. In the three-round, 9-hole course, Mya earned a 46, 42 and 46, respectively. “It was the ... END_OF_DOCUMENT_TOKEN_TO_BE_REPLACED 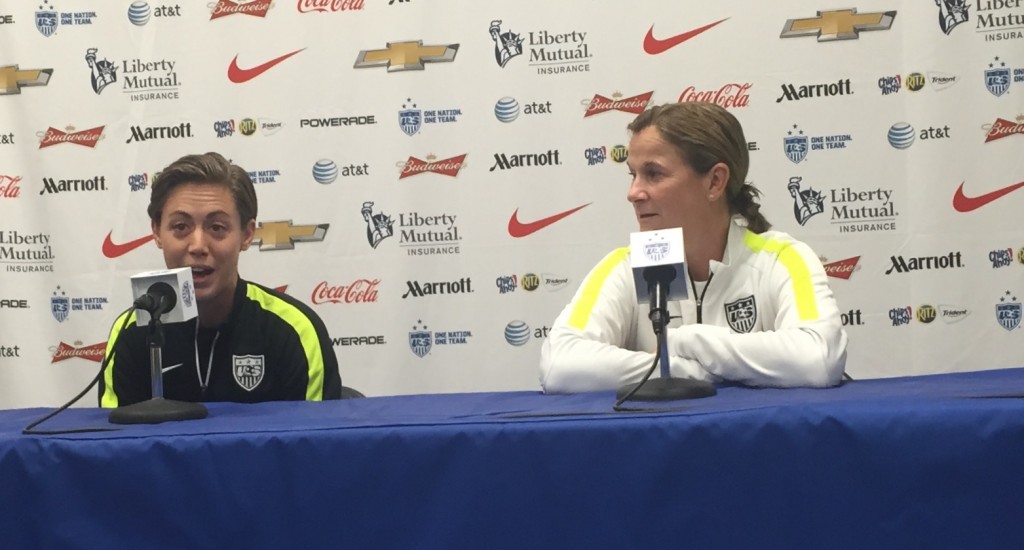 For the U.S. women’s national soccer team, a lot has changed in a month. The group of 23 women that captured the hearts of America en route to a World Cup win in July will take the field again for the first time since their title win in Pittsburgh on Sunday. “It’s exciting,” said captain Carli Lloyd. “It’s crazy to think that it’s a little over a month ago that we played in that final. It feels like it’s been a year ago. It’s been a whirlwind and it’s been busy and it’s exciting.” In ... END_OF_DOCUMENT_TOKEN_TO_BE_REPLACED 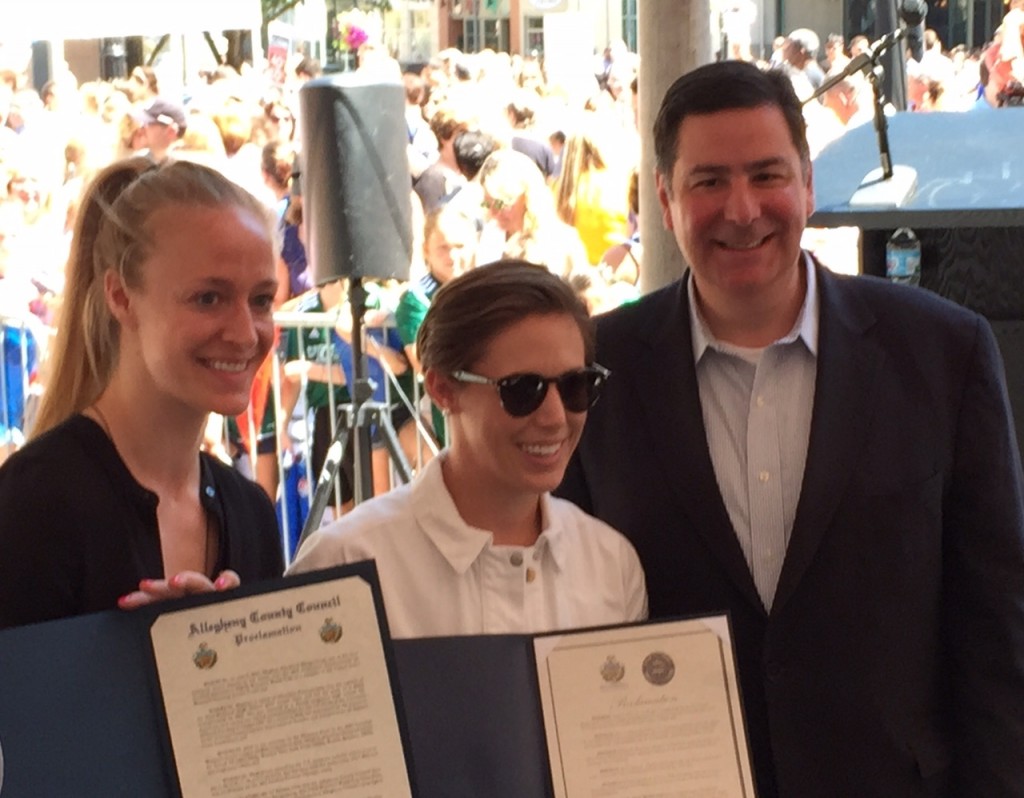 The City of Pittsburgh and Allegheny County honored World Cup champion Meghan Klingenberg with a proclamation ceremony on Friday afternoon, with Pittsburgh Mayor Bill Peduto declaring August 14, 2015 to be “2015 Women’s World Cup champions day.” Klingenberg, a 27-year old graduate of Pine-Richland High School and a Gibsonia native, was wowed by the ceremony held in her honor and the response her hometown has had to the national team friendly being held on Sunday. Market Square was packed with ... END_OF_DOCUMENT_TOKEN_TO_BE_REPLACED

Pittsburghers will get their first chance to get an up close and personal look at the Women’s World Cup trophy on Friday, when U.S. National Team defender and Gibsonia native Meghan Klingenberg will be honored in a proclamation ceremony in Market Square. Klingenberg, 27, is a graduate of Pine-Richland High School and the University of North Carolina and has been a member of the national team since 2011. In the 2015 World Cup, she was one of five American players to play every minute of the ... END_OF_DOCUMENT_TOKEN_TO_BE_REPLACED

When the US Women’s National Team takes to Heinz Field under head coach Jill Ellis on August 16, the match won’t mean anything. The international friendly against Costa Rica isn’t likely to be competitive. Las Ticas, as the Costa Rican women are known, just participated in their first World Cup. In a match that mattered last October, the U.S. cruised to a 6-0 victory. Even if it suddenly becomes something of a match, the outcome means little to the American squad. Mostly, it will be a ... END_OF_DOCUMENT_TOKEN_TO_BE_REPLACED