Home / NCAA Football / D1 & FCS Football / AM Joe: Bucs get a day off after series win

Pitt (2-0) head coach Pat Narduzzi will have his first press conference since the Panthers beat Akron on Saturday at 1 p.m.

The Pirates (86-56) are off today. They start a four-game series with the Chicago Cubs (82-60) with a day/night doubleheader tomorrow. The Cubs are four games behind the Pirates for the first NL Wild Card spot. The Pirates trail the Cardinals by 2.5 games for the division lead.

The Pirates overcame a 6-1 deficit to beat the Brewers in extra innings last night. Josh Harrison (above) hit an RBI single in the 11th inning to secure the win. 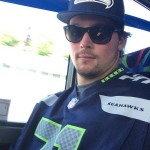 With most of the NFL starting their season on Sunday, the Pirates players took the opportunity to show off their allegiances in the locker room. OF Travis Snider (right) is a die-hard Seattle Seahawks fan.

General manager Neal Huntington had his weekly press briefing and the Brewers interviewing his assistant, Tyrone Brooks, for their GM position, among other topics.

Harrison, meanwhile, was the topic of Zac Weiss’ pregame article, where he examined his success since returning to the lineup from injury.

The Pirates short-season Single-A affiliate, the West Virginia Black Bears from Morgantown, WV, are heading to the New York-Penn League championship after beating Williamsport in a best-of-three opening playoff round.

With the aforementioned NFL season opening on Sunday, four of our writers made their first weekly NFL picks of 2015. After Sunday’s games, editor and columnist Michael Waterloo is in the lead with a 9-4 record.

The WVU Mountaineers are on the cusp of the AP Top 25 after beating Liberty, while Duquesne sits atop the NEC with a win over Bucknell. That and more in our college football notebook.

Four area Division-II schools earned victories in the second week of the season. The full story is in Matt Welch’s PSAC roundup.

On this date in 1994, the remained of the MLB season was canceled due to a player’ strike. It remains the only season the World Series wasn’t played due to a labor issue.

He said it: “You’re gambling. You’ve got the game on the line.” — ‪‎Pirates‬ manager Clint Hurdle on his decision to go for a pivotal double play in the 11th inning against the ‪Brewers‬.