For the only time this regular season, the Penguins (2-3-0) will host the Florida Panthers (3-2-0) at Consol Energy Center. Coming up north with the Panthers will be longtime Pens right-winger and second-leading all-time scorer Jaromir Jagr (above). Opening faceoff between the Pens and the Cats will be at 7:00 p.m.

Reaction from the Steelers (4-2) big win over the Arizona Cardinals on Sunday continues with Steelers writer Gar Bercury’s weekly three up, three down.

Steelers editor Matt Shetler checked the film and handed out some grades in his weekly report card.

Matt also had the big news of the day on Monday, with the Steelers signing offensive tackle Byron Stingily and placing injured LT Kelvin Beachum (ACL) on injured reserve.

If the Black and Gold can keep finding ways to win without Ben Roethlisberger, they could end up being Super Bowl contenders, writes Andrew Hodgson.

Pitt kicker Chris Blewitt was named ACC Specialist of the Week after his game-winning field goal against Georgia Tech on Saturday.

The Clarion Eaglesare nationally ranked after last weekend’s victory over Seton Hill. Get all the news in our weekly PSAC notebook. 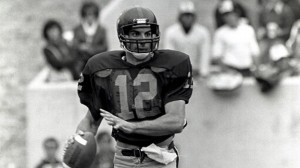 On this date in 1981, the No. 1 ranked Penn State Nittany Lions beat Oliver Luck (right) and the West Virginia Mountaineers, 30-7. Luck finished 24-of-39 for 226 yards and a touchdown. In the game, Luck set school records for pass completions and passing touchdowns.

Luck later played in the NFL for the Houston Oilers and was West Virginia’s athletic director from 2010 to 2014. He currently works for the NCAA. His son, Andrew, is the starting quarterback for the Indianapolis Colts.

He said it: “We lost three games. It’s not fun. We understood that we couldn’t lose anymore.” — Penguins center Evgeni Malkin on the team’s first victory of the season.