The Pirates (79-49) have won four straight games and will go for a series sweep of the Colorado Rockies (51-76) this afternoon at 1:35 p.m. Charlie Morton (right) will take the hill for the Bucs against Jorge De La Rosa. ROOT Sports Pittsburgh

Aramis Ramirez staked the Pirates to a big lead with his first-inning, three-run home run and J.A. Happ won his fourth straight start as the Bucs moved to 30 games over .500 with their 4-3 win over the Colorado Rockies.

Our Andrew Hodgson examined the Pirates potential September call-ups and what impact each of them could have down the stretch in 2015.

Pirates outfielder Gregory Polanco had a historic night on Friday with his performance against the Rockies.

The surviving members of the Pirates 1960 World Series championship team celebrated their 55th anniversary with a reunion at PNC Park on Saturday. The “Beat ‘Em Bucs” shared how much they enjoy watching this year’s team play.

Speaking of the 1960 Pirates, if you’re looking for some chills this morning, go ahead and watch along with Yogi Berra as Maz lets it fly over the left field wall at Forbes Field.

The Steelers defense took a beating, giving up 542 yards in their 43-19 preseason loss to the Buffalo Bills on Saturday afternoon. The Steelers again had injury issues, as kicker Garrett Harley (hamstring) and linebacker Bud Dupree (foot) left Sunday’s game.

The Riverhounds will come back to Pittsburgh with a crucial three points thanks to a 1-0 victory over Louisville City on the back of Rob Vincent’s penalty kick goal and Calle Brown’s clean sheet.

The Wild Things got four RBIs from rookie Cody Herald to beat the Evansville Otters 7-2 and secure the 700th win in franchise history. 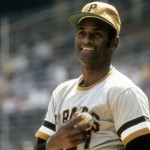 On this date in 1972, Pirates right fielder Roberto Clemente (right) went 2-for-5 to tie the team record for most career hits with 2,970, the mark set by Honus Wagner in 1917. Clemente would break the record the following day, and finish the season with 3,000 hits before tragically perishing in a plane crash that December.

He said it: “Some of those guys just look like they’re walking dead.” — Steelers head coach Mike Tomlin on his team’s “disappointing” performance against the Bills.