The Pirates (83-56) were lucky to not lose any ground in the NL Central after their loss to the Brewers last night. The Cardinals also lost, keeping the Bucs 4.5 games back of the Redbirds. Charlie Morton will toe the rubber for the Pirates tonight. First pitch is at 7:05 p.m.  ROOT Sports Pittsburgh

The votes are in!

We asked and you answered in yesterday’s reader poll, in which we asked whether 38-year old RHP A.J. Burnett or 37-year old OLB James Harrison would have a bigger impact on their team in 2015. 48% of you picked Burnett (right), 32% wrote in to select both, and 20% selected Harrison.

Pirates beat man Zachary Weiss got Clint Hurdle’s thoughts on the growing number of ejections in baseball, in addition to Jung Ho Kang’s breakout performance and an old friend having a good season.

The Steelers couldn’t contain Rob Gronkowski, and the Woodland Hills grad scored three touchdowns to lead the Patriots to a 28-21 victory that wasn’t as close as the final score.

The grades are in. Steelers editor Matt Shetler has the report card from the Steelers Week 1 performance in Foxoborough, Massachusetts. At this rate, some of them may need to drop a few classes.

The best news of the day came for Pitt fans as AD Scott Barnes announced the resumption of the Backyard Brawl. The Panthers and West Virginia Mountaineers are now scheduled to play each other four times from 2022 to 2025.

It’s the second week of WPIAL football, and our Jarrod Prugar’s pick of the week will take him to Woodland Hills, where the Wolverines are hosting the Bethel Park Black Hawks. 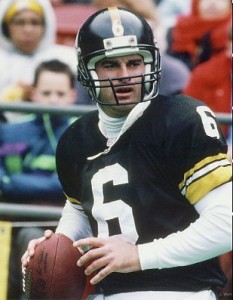 t could be worse, Steelers fans. On this date in 1989, the Steelers fans were waking up to the largest — and most embarrassing loss — in franchise history after the Black and Golf were shut out, 51-0, by the Cleveland Browns at Three Rivers Stadium.

Bubby Brister completed just 10-of-22 passes for 84 yards and threw three interceptions, one of which was returned for a touchdown. The Browns also scored on two fumble returns.

The Steelers would also lose the next week (41-10 to the Cincinnati Bengals) before bouncing back for a 9-7 record and a Wild Card berth.

He said it: “That’s always the case.” — Steelers head coach Mike Tomlin on the headset issues his team had during Thursday night’s NFL opener in New England.