Duquesne (9-16, 4-10) takes on 10-year Atlantic 10 member Saint Louis (11-16, 3-11) tonight at 7:00 p.m. ET at the A.J. Palumbo Center in Pittsburgh, Pa. Forward Dominique McKoy will be the lone senior honored in a pregame Senior Day ceremony. The Dukes are coming off an 83-73 upset win over Dayton Saturday at the CONSOL Energy Center. Duquesne will put forward their best 3-point shooting team (.365) since 2003 (.366) in the effort, led by junior guards Derrick Colter and Micah ... END_OF_DOCUMENT_TOKEN_TO_BE_REPLACED

“I always joke around that if we’re in a contest, I want to win. If I was on the court with your grandmother, I’m going to beat her, and I’ll apologize afterwards.” That is the attitude that California University of Pennsylvania Sports Hall of Fame inductee and accomplished Duquesne basketball standout Darcie Vincent, and her competitiveness—evident on and off the court. Vincent was inducted Saturday alongside Roger Gordon (men’s soccer, 97’) and Kim Miller (softball, 09’). The Fairmont, Wv. ... END_OF_DOCUMENT_TOKEN_TO_BE_REPLACED

Duquesne (9-16, 4-10) rallied to defeat Atlantic 10 co-leader Dayton (20-6, 10-4) in an 83-73 upset win this afternoon at the CONSOL Energy Center. The Dukes were led by junior guard Derrick Colter, who had a team-high 25 points in scoring his thousandth point on a 3-pointer with 18:06 left in play. Colter became the 38th player in Duquesne history to be given the honor. “It was a good win. I just wanted to win,” Colter said. “I [don’t] really care about the thousand points right now—I ... END_OF_DOCUMENT_TOKEN_TO_BE_REPLACED

The Duquesne Dukes(8-15, 3-9) look for their first Atlantic 10 road win Wednesday night, facing La Salle (14-11, 6-6) at 7:00 pm ET at the Tom Gola Arena in Philadelphia, Pa. Both teams are coming off Saturday losses; the Dukes are reeling from an 82-74 loss at UMass while La Salle recovers from a 77-69 decision to Davidson at home. Despite their record, including 0-6 in road conference play, Duquesne has been outscoring Atlantic 10 opponents by +3.0 ppg at home, with three of the Dukes’ ... END_OF_DOCUMENT_TOKEN_TO_BE_REPLACED

Duquesne (8-15, 3-9) suffered a 82-74 loss yesterday to UMass (16-9, 9-3) at the Mullins Center in Amherst, Ma. Five Dukes reached double-digits in the effort, led by junior guard Micah Mason with 20 points. Junior guard Jeremiah Jones put up 11 points, in addition to grabbing nine rebounds and providing seven assists. Junior guard Derrick Colter scored all 11 of his points in the second half. Freshman forward Jordan Robinson and senior forward Dominique McKoy each scored 10 points. The ... END_OF_DOCUMENT_TOKEN_TO_BE_REPLACED 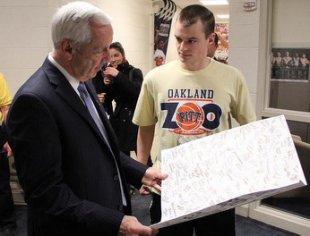 “Energy and aggressiveness.” Those are the words that Duquesne’s junior guard Jeremiah Jones used to describe his team’s 78-62 wire-to-wire win Wednesday night against George Washington (17-7, 7-4) at the A.J. Palumbo Center. The Dukes are now 8-14 and 3-8 in conference play. Junior guard Micah Mason led the court with a career-high 24 points, followed by junior guard Derrick Colter with 18 points. Also contributing for the Dukes was Jones with 10 points, seven rebounds and seven assists; ... END_OF_DOCUMENT_TOKEN_TO_BE_REPLACED