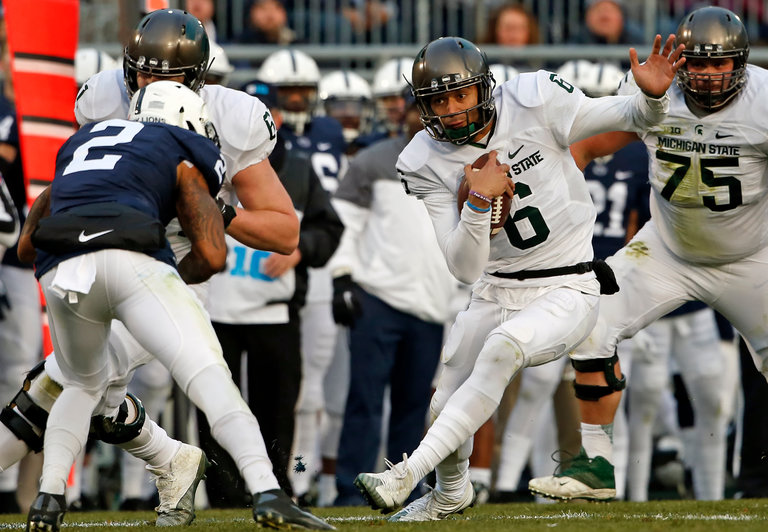 The No. 7 Penn State Nittany Lions (10-2, 8-1 Big Ten) were catapulted to a win by a 21-point third quarter en route to a 45-12 victory over the Michigan State Spartans on Saturday afternoon at Beaver Stadium in State College, PA. Here are the game’s “Cheers and jeers.”

“Bend, don’t break” defense— Michigan State marched the ball into the red zone on all four of its first half drives, however, Penn State only gave up field goals on all four trips. In the second half, Michigan State struggled to get anything going offensively as the Nittany Lions’ defense came out firing on all cylinders.

“Splash” plays pay off big— Each week, head coach James Franklin usually comments on the “splash plays” the team makes each game and how it’s a goal to lead in that category each game. The splash plays paid big dividends for the Nittany Lions’ offense in the third quarter as Trace McSorley threw touchdown passes on three consecutive drives to start the quarter. McSorley found Chris Godwin twice for touchdowns of 34 and 59 yards, and the quarterback found tight end Mike Gesicki for a 45-yard touchdown strike.

McSorley would find Andre Robinson for a 40-yard touchdown reception to cap the scoring in the fourth quarter.

Second half successes continue— As much as Franklin and company dislike talking about being a second half team, the fact remains. Penn State is very much a second half team. The Nittany Lions came out on fire in the second half with touchdown strikes on all three of their third quarter possessions while not allowing a Michigan State drive to get to the red zone.

Penn State outscored Michigan State 35-0 in the second half.

Starting slow— The Penn State offense spit and sputtered its way to 10 points in the first half, with nothing going for either the rushing or passing game. While the offense struggled, the defense bent — but didn’t break — allowing the Spartans to score on all four of their first half drives, but the could only score off field goals.

The highlight of the game comes from tight end Mike Gesicki.

ICYMI: @PennStateFball is adding on, this time on a pretty Mike Gesicki TD.

Double coverage was no match for the 6’6″ tight end, as Gesicki elevated above the Michigan State defenders to haul in a 45-yard pass from McSorley. The 45-yard grab was one of three touchdown passes for 30-plus yards from McSorley in the third quarter (with the other two going to wide receiver Chris Godwin).

With the victory over the Spartans, Penn State will head to its first-ever Big Ten Championship game to take on Big Ten West division champion Wisconsin. The Badgers come into the match-up following a 31-17 win over the Minnesota Golden Gophers to finish the regular season with a 10-2 overall record and a 7-2 record in conference play.

The Nittany Lions haven’t played Wisconsin since 2009, when Penn State won 31-24 in Madison.