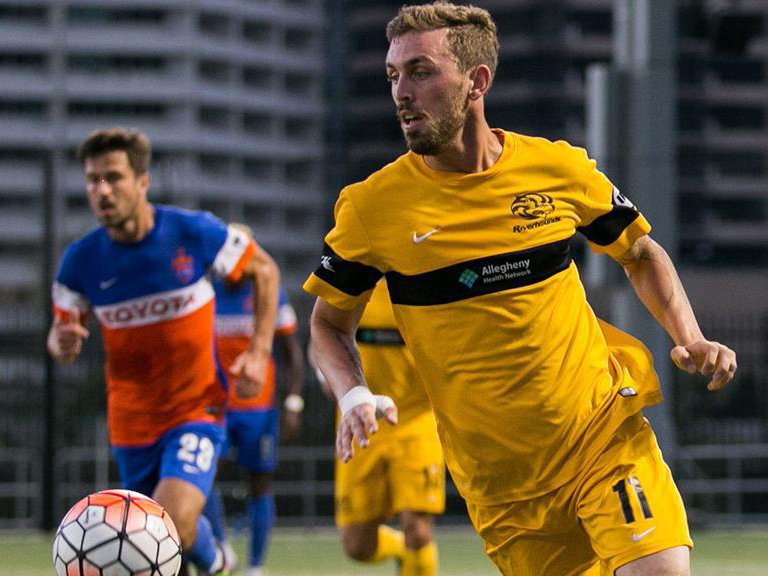 The Pittsburgh Riverhounds can take a deep breath. The club will have its leading scorer back for the 2017 season.

The Riverhounds announced Wednesday they will exercise the 2017 club option on forward Corey Hertzog. Hertzog, who appeared in 30 matches last season for the Riverhounds, scored a total of 13 goals. He also led the team in assists (4), minutes (2,500), points (30) and shots (62).

Head coach Dave Brandt praised the efforts of Hertzog from last season and said he was excited about bringing the 26-year-old back.

“Corey is an incredibly integral part of not only the team, but I think of my vision here,” Brandt said. “He’s one of my favorite players that I have coached in a long time because of his work rate, his energy and his positive attitude and, of course, his ability to put the ball in the back of the net. I’m thrilled to have Corey back for 2017.”

Before venturing to the Steel City, Hertzog played college soccer for the Penn State Nittany Lions, where he notched 20 goals in his junior season. While in college, he played for Reading United in the USL Premier Development League and scored four goals in 12 appearances.

Hertzog applied for the MLS SuperDraft in 2011. He tried to sign a Homegrown contract with the Philadelphia Union, but he was drafted by the New York Red Bulls.

With the Red Bulls he made five appearances. In 2012, he went on loan with the Wilmington Hammerheads, where he recorded nine goals in 17 appearances. The next year, he went to the Vancouver Whitecaps, where he made seven appearances and scored one goal.

He then went to the USL’s Orlando City SC team in 2014. He made 22 appearances and scored four goals. His efforts earned him a contract with the Tampa Bay Rowdies in 2014. Over two seasons, he scored eight goals in 47 appearances.

After his two-year stint with the Rowdies, he signed a contract with the Riverhounds.

Hertzog is now the eighth player under contract for the 2017 Riverhounds season. He is joined by Kevin Kerr, Chevaughn Walsh, Kay Banjo, Keasel Broome, Shane Campbell, Ritchie Duffie and John Manga. The Riverhounds season will kick off in March/April of 2017.