Home / NHL / Crosby returns versus Ovechkin and the Captials

The Pittsburgh Penguins had better have done a good job of resting up over the all-star break, as their second test in just over 24 hours awaits them in the form of the Washington Capitals tonight. After <a href=http://www.pittsburghsportingnews.com/letangs-five-assists-lead-pens-past-jets/19318> Winnipeg Jets 5-3 at home on Tuesday night</a>, the Penguins boarded a plane for the nation’s capital where they’ll take on the Capitals tonight at 8:00 p.m.

Meeting them was will be center Maxim Lapierre, <a href=http://www.pittsburghsportingnews.com/pens-swap-centers-send-goc-to-st-louis-for-lapierre/19315>acquired from the St. Louis Blues for Marcel Goc late last night<a/>. Lapierre, 29, will wear sweater number 40 with the Penguins and will play in tonight’s game. 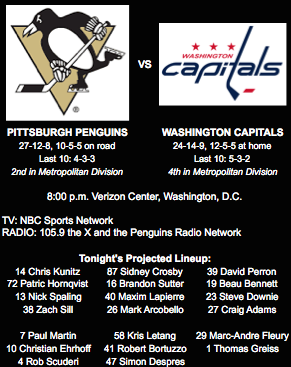 TONIGHT’S OPPONENT: On the other side of the greeting party will be Alex Ovechkin and the Capitals.

Ovechkin leads the Caps with 27 and is one behind Dallas’ Tyler Seguin and the New York Rangers’ Rick Nash in the race for the Rocket Richard Trophy for the league’s top goal scorer.

The Capitals come into tonight’s contest just five points behind the Penguins in the Metropolitan Division, holding on to the eighth and final playoff spot in the Eastern Conference. Their success under new head coach Barry Trotz has been mostly on the defensive side of the puck, as the Caps are on pace to give up 216 goals this season, a 24-goal improvement from a season ago.

Braden Holtby will get the start in goal for Washington. Holtby, a 25-year old from Lloydminster, Saskatchewan, has already played 41 games for the Capitals this season, which is the most in the league. He has a 22-10-8 record and a .920 save percentage in 2014-15. In five career starts against the Pens, he’s 1-4 with a .900 save percentage and a 3.40 goals-against average.

CAPTAIN’S BACK: Penguins captain Sidney Crosby will return to the Pens’ lineup tonight after missing Tuesday night’s game with a lower-body injury. Crosby was required by league rules to sit out against the Jets because he missed last weekend’s NHL All-Star Game in Columbus. Crosby will likely be slotted in between Chris Kunitz and David Perron on the Penguins’ top line.

Several factors would complicate the deal: the Penguins do not have much cap space at all – let alone enough to absorb Jagr’s $5.5 million cap hit. The Penguins also don’t have an obvious trade piece to dangle. They have already traded their first- and third-round draft picks in the 2015 NHL Draft.

Because the Penguins would likely required the Devils to retain a large portion of Jagr’s salary, no trade is believed to be imminent, and any trade between the teams would likely take place closer to the NHL’s trade deadline of March 2.