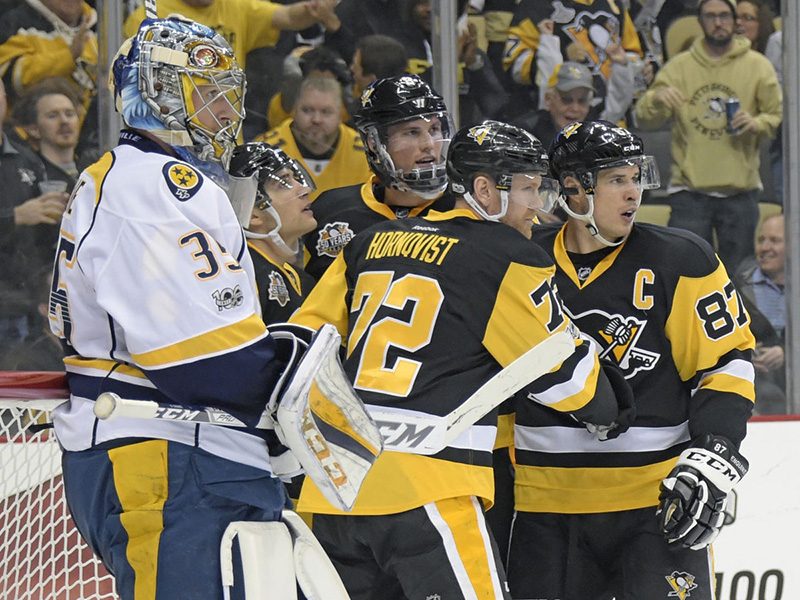 After five days off for the All-Star break, the Pittsburgh Penguins (31-13-5) hosted the Nashville Predators (24-17-8) for the first game of the second half of the season. Following a 1-1 first period, the Penguins had yet again another offensive barrage in the second period, where they scored three goals.

Pittsburgh managed to hang on to the lead all the way through and finished the game with a solid 4-2 win.

While the Predators were able to score a goal in the latter half of the third period, Penguins goalie Matt Murray was able to show up in clutch situations to prevent Nashville from making the game any closer. Pittsburgh didn’t play a very physical game, however, that wasn’t needed as right winger Patric Hornqvist scored two goals to help his team get the win over a great hockey team from the Western Conference.

A former Predator, Hornqvist got his 13th and 14th goals this year, the final one coming late in the second period on the powerplay. But tonight’s game can’t be solely accredited to the forward — a lot of credit must also be given to Murray.

Even though he is healthy, goaltender Marc-Andre Fleury hasn’t played a game in 21 days. While this is mainly because of all the time Murray missed, it still must pain Fleury considering his above-average season thus far.

Realistically, it’s likely Fleury will be on the shortlist of possible departures — either through trade or expansion draft this offseason. And although he’s scheduled to start the next game, his days in the Steel City may just be numbered.

The Penguins did a great job both starting and finishing the game. Right out of the gate, Pittsburgh was flying up and down the ice (although the score at the time didn’t reflect the team’s effort). Nashville’s Calle Jarnkrok was able to score the game’s first goal, which would be his team’s only goal until early in the final period of play.

The Penguins were able to keep pressing and stayed with their game-plan through the entirety of the evening. What was just as impressive was Pittsburgh’s ability to shut down the Predators after allowing an early goal.

With a league-leading 24th four-goal game this season, the Penguins snapped a small two-game skid and took advantage of the extra time off, showing no rust whatsoever.

“The second period we played a really good game, and that’s the way we need to play for the rest of the season. … (Nashville) plays a really tight neutral zone, we knew if we could get it through the blue line we had a chance to win. … Some nights you find the puck, and some nights you don’t. Tonight, I did,” Hornqvist said.

One thing for certain is that is the 30-year-old forward may just be the Penguins grittiest player — not just on offense, but possibly on the whole team. The vast majority of his career goals have come from grinding out up around the goalie’s crease, and tonight was no different.

Although loose pucks and deflections certainly helped, Hornqvist has one of the sharpest minds in tracking down the puck in tight areas and getting it past the goalie. Noted earlier, with Pittsburgh being able to run around the Predators’ tight neutral zone defense, this opened up the offense being able to pressure deep into Nashville’s zone.

The Penguins will next host the division foe Columbus Blue Jackets this Friday at PPG Paints Arena at 7:00 p.m. EST.