Home / NHL / Kris Letang out with a concussion; Pens to play with five defensemen

Pittsburgh Penguins defenseman Kris Letang will miss tonight’s game against the San Jose Sharks with a concussion suffered at the hands of Arizona Coyotes forward Shane Doan on Saturday afternoon.

Letang skated off with some assistance after the hit, which happened at 15:15 of the second period. He was taken to the hospital for evaluation after the game.

“He has been released from the hospital, so like anything else, we’ll just take it as a day-to-day thing and see how he reacts and recovers from it,” said head coach Mike Johnston. 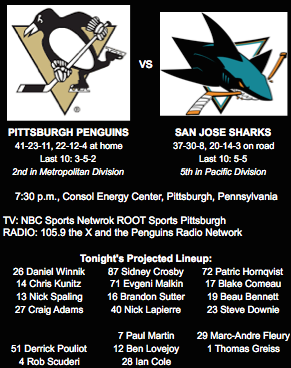 With fellow defenseman Christian Ehrhoff also out with an upper-body injury, and no cap space to make a recall from Wilkes-Barre/Scranton, the Penguins will be forced to play with five defensemen tonight.

If they get into a situation where they lose another defenseman, it appears that left-winger Daniel Winnik will be the emergency defenseman.

“If it happens, I’d be more than happy to go back,” he said.

The Penguins are also expecting to be without forward David Perron, who missed Saturday’s game with an illness and did not practice this morning.

That will leave the Penguins with just five defensemen and 12 forwards, one short of the usual 18-skater roster. 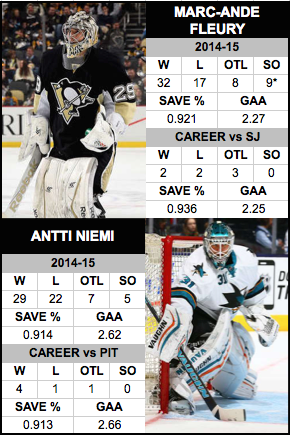 That would allow the team to make one cap-free recall in advance of Wednesday’s game against the Flyers.

TONIGHT’S OPPONENT: For the first time since 2003, the San Jose Sharks are in danger of missing the playoffs in the Western Conference. They are eight points behind the Winnipeg Jets for the final wild card spot in the West with just seven games left to play for each team.

This is the final game of a seven-game road trip for the Sharks that has seen them make stops in Winnipeg, Toronto, Montreal, Ottawa, Detroit and Philadelphia before finding their way to Pittsburgh.

They are 3-3 on the trip, with back-to-back wins against the Red Wings on Thursday and the Flyers on Saturday afternoon. 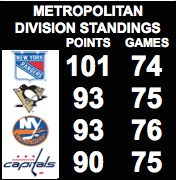 SCOREBOARD WATCHING: The Penguins win yesterday, along with the New York Islanders 3-2 loss to the Anaheim Ducks, allowed the Penguins to draw even with the Isles with 93. The Penguins currently sit in second place due to playing one fewer game.

The Islanders host the Detroit Red Wings tonight at 5:00 p.m., while the first-place New York Rangers host the Washington Capitals at 3:00 p.m. That game will be televised on NHL Network.

The Wheeling Nailers (32-30-2, 4th in ECHL North) won a wild one, beating the Reading Royals 5-2 on Saturday night. Eric Hartzell stopped 29 of 30 Royals shots to earn his second win in as many nights. The first Reading goal didn’t count against Hartzell, as the Nailers inadvertently played the puck into their own net with Hartzell pulled on a delayed penalty.

Derek Army scored the game-winning goal and added an assist. Zack Torquato had two goals. Jarrett Burton and Chaz Johnson also scored for the Nailers. Shane Bakker had an assist and 37 penalty minutes, as the Nailers captain got in to three fights, the last of which was a brawl at 19:35 of the third period that also saw Patrick McGrath earn 37 penalty minutes.

The Nailers will host the Cincinnati Cyclones today at 4:00 p.m. Wheeling currently leads the Cyclones by one point for the fourth and final playoff spot in the ECHL’s North Division. The Nailers also have a game in hand on Cincinnati.

#CAWLIDGEHAWKEY: It never happens in NCAA basketball, and it had never happened in NCAA hockey until Saturday, when the 16th seed in the NCAA tournament, the RIT Tigers, knocked off the top-seeded Minnesota State Mankato Mavericks by a 2-1 score. The Tigers, the lone representatives of the Atlantic Hockey Conference, got an early lead on a goal from Pittsburgh native Alexander Kuqali.

The Tigers will face Nebraska-Omaha in the regional final tonight at 7:30.