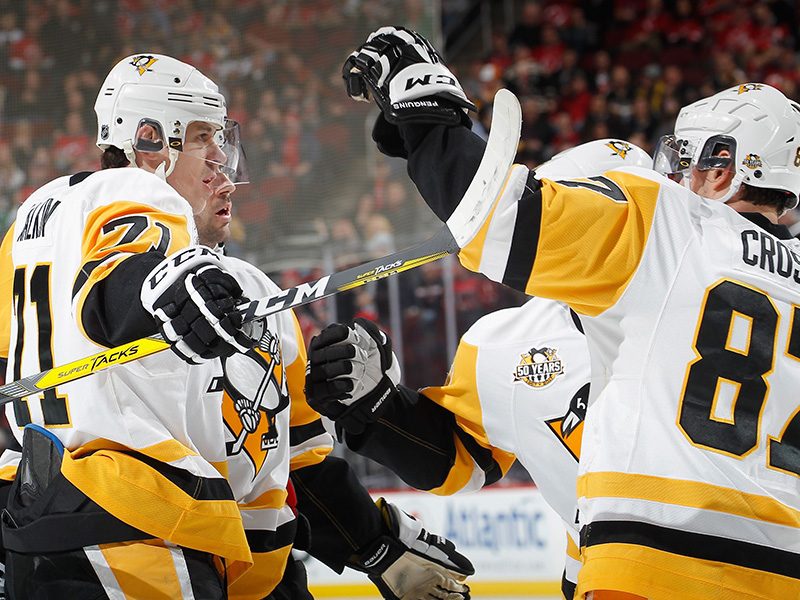 The Penguins celebrate scoring in Tuesday's 5-2 win over the Devils. (Photo by: Paul Bereswill/Getty Images)

Some familiar names propelled the Pittsburgh Penguins (23-8-5) to their 5-2 win against the New Jersey Devils (13-15-7) on Tuesday night. Sidney Crosby and Evgeni Malkin both scored a goal and had at least one assist in Pittsburgh’s solid win.

Justin Schultz, who has been one of the Penguins’ hottest players this month, scored his seventh goal on the season. His goal gave the Penguins a very late second-period 3-2 lead and, with two more goals – one from Carl Hagelin, the other from Bryan Rust – in the third period, the Penguins were able to notch another victory on the season.

Crosby — who, against New Jersey, scored his league-leading 25th goal this season — proved why he’s the leader of this team. His goal and two assists in Tuesday’s game just added to the MVP resume by the league’s hottest player, and his performance was necessary considering the Penguins didn’t get off to a great start.

Two first-period goals by New Jersey’s PA Parenteau and Adam Henrique gave the Devils an early lead. But Pittsburgh was able to rebound from a sluggish start and get four-straight goals.

With the Columbus Blue Jackets still atop the Metropolitan division by a single point, every game matters — even this early on. The rest of the division is doing fairly well, too, which makes the Penguins’ job that much more difficult.

Even though Pittsburgh will be without defenseman Brian Dumoulin for four to six weeks after a puck hit him in the jaw, breaking it, the defense is still in pretty good shape. The defense has been the Penguins’ biggest surprise this season.

The defensive play by all the line pairs has been very impressive, and the the defense’s ability to transition from offense to defense — and vice versa — gives the Penguins a nice edge over their competition.

Pittsburgh’s ability to create space and find the open man on offense has been a hallmark of the blue line play this year. The Penguins need to continue to play like this on all sides of the puck. Although injuries have popped up recently, the “next man up” mentality sure hasn’t changed from last season.

Crosby has really been Pittsburgh’s biggest weapon this year, but this should come as no surprise. With three points in the game against the Devils, Crosby has extended his point streak to five games and leads the league with 25 goals in 30 games.

Keep in mind that the captain missed time at the beginning of the season, further proving that Sid the Kid is indeed back — just maybe less of a kid this time around. Without the superb play and precision by one of the league’s best players, there’s no telling exactly where this team would be.

However, games like Tuesday night helps pad the idea that Crosby is Pittsburgh’s biggest catalyst for a successful outing. Life is certainly made easier for his teammates when he is on the ice and if he continues to play on this level the Penguins have a good outlook for the rest of this season.

The Penguins will next play the Carolina Hurricanes on Wednesday at 7:00 p.m. EST at PPG Paints Arena.